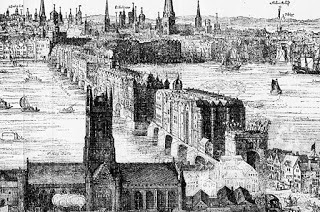 The shadows beneath the great stone bridge were deepening and the nineteen pillars stood pale and proud as night slipped over old London. The starling platforms which slowed the swirl of the river between the pillars and out towards the estuary were grazed by the bump of the wherry boats and barges. The bridge was too low for the great sea-going ships, but the tenders bringing in the cargo were busy every day and a few at night. Still the occasional splash of the oars could be heard by those living in the houses along the bridge or praying in the chapel. The squawking squall of the sea birds had faded as the gulls slept. 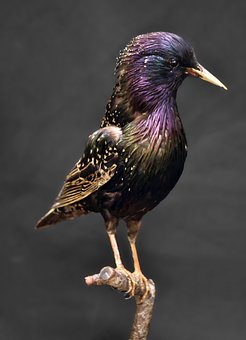 Yet on one of the central stones, starlings huddled tight into the depth of shadow, and chattering amongst, were three aged women, each partially hidden by a dark hooded cloak.
“Hubble, bubble, toil and trouble,” said Winifred.
Mabel scowled. “I wish you’d stop saying that, Winnie,” she complained. “It doesn’t mean a damn thing, you know.”
Winifred looked somewhat abashed. “Well, I have to say something,” she complained. “Otherwise I just sit in silence while you and Bossy Boring Bandy Belinda talk non-stop.”
Belinda, shaking her curls within her hood, ignored these insults and addressed Mabel with haughty calm. “It’s the coronation tomorrow,” she said. “I was looking forward to the feast.”
“What makes you think you’ll be able to get a drink amongst the thousands there?”
“I can slip in without being noticed,” Belinda insisted. “You can sit and go thirsty if that’s what you want, but I intend inviting myself to the feast.”
They all stared at each other. It took a little time to consider.
“No,” said Winifred.
“Yes, definitely,” said Belinda.
“I’m just not sure,” said Mabel. “It’s not an easy decision. Is the new king worth it?”


Surprising the others, it was Winifred who answered. “He’s another Henry,” she said. “He’ll be the eighth. They seem to think he’s strong and handsome. I heard he has red hair and he’s as tall as the Keep at the Tower. Of course, everybody thinks he’s wonderful just because he’s taken over from his miserable father, who everybody hated.”
“Oh, pooh,” objected Mabel. “The last one was a miserable sod, but who knows if this one will follow his father and end up the same?”
“King Henry VII was an ugly old thief,” said Belinda with feeling. “He sat in his counting house all day, counting out his money and trying to think of a way of getting some more. Well, after all the trouble he went through to try and steal the crown, it never did him much good. Oh yes, he got rich and bought some fancy clothes, and now he’s made his son rich, but he never enjoyed himself except perhaps in bed with his wife. Now he’s dead, and this son is good looking and jolly.”
“Does that make him a good man?”
“And will it make him a good king?”
“Frankly, who cares?”
“Personally,” Mabel decided, “I’m cold. Do we have to sit out here under the bridge? The wind is coming up from the east, and it's chilly.  Can’t we go into one of the back streets or find a courtyard, light a fire and keep warm?”
“People will complain if we light a fire,” Belinda pointed out. “Fire is such a danger with all these silly little cottages with thatched rooves.”
“Perhaps we could light a little fire here on the river,” suggested Winifred. “No one can see us anyway.”
Mabel stared at Belinda and Belinda stared back. “What? Three little old ladies huddle in secret under the bridge, warming their hands over a fire in the middle of the Thames River? No, people will see us and think we’re witches or something.”
“Well, we’re not witches, said Winifred crossly. “
“Well, don’t act like one,” complained Mabel. “We can’t help being old.” She smiled a little sadly at her two friends, wrinkled necks beneath their cloaks, little wrinkled faces and wrinkled hands. She held out her own hands, seeing the sepia spotted signs of age, the wizened knuckles and the broken nails. “Poor little me,” she smiled. “But age also brings wisdom.”
“Maybe for you,” nodded Belinda. “But not for Winnie.” 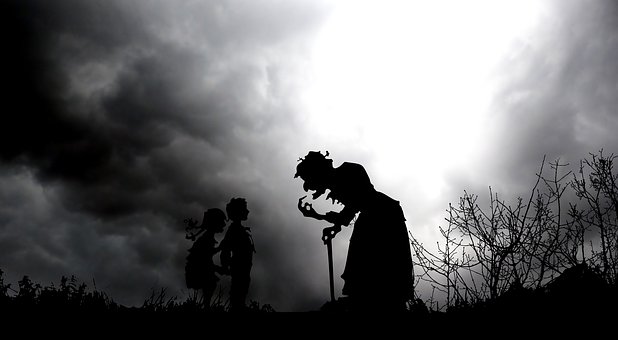 Getting a little tired of this continuous stream of insults, Winifred struggled to her feet, but the starling base wobbled, and she sat down again in a hurry. “Humph,” she said, half choking. “I think I’ll go off on my own and find a more cheerful spot to spend the night.”
“We could all try a monastery,” suggested Mabel. “Sometimes they take poor people in for the night, and we’re certainly poor. I mean, it’s fairly clear we are poor old crones without a penny to our names.”
“I liked the idea of lighting a fire,” persisted Winifred. “I know I’m an ugly old thing, but everyone is at our age. Though I don’t want to spend the night with nuns and monks, I’d feel very unwanted.”
“We don’t have to admit that we’re not religious.”
“Well, we could pretend. Otherwise, you seem to think we look like witches. I object to that. I certainly don’t act like a sick old witch.”
Belinda laughed. “Now then, let’s work out something sensible, since we want to be ready to watch the coronation and join the feast.”

After a long chilly hour of argument, Winifred, Belinda and Mabel trailed from the river to the stabling sheds behind the tavern on the corner of Thames Street, and snuggled in beside the horses. This was certainly warm. The horses weren’t very pleased at first, but they put up with it and even when the old ladies pinched most of the straw, they accepted their fate, and everyone fell asleep snoring. 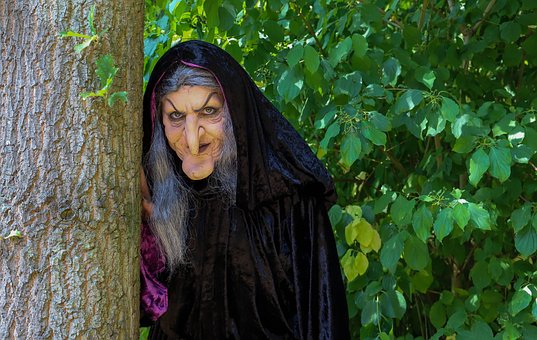 The following morning they could already hear the cheering, the slap and crack of the bright painted banners hanging from every upper window, splashing their colours in the breezes. The king would ride from his royal apartments within the Tower, and slowly cross the mile from one side of London to the other.
The noise and pageantry were glorious, and the guards in their scarlet livery, followed by all the lords and ladies of the court who waved and smiled at everyone. The crowds lined every street as the king trotted through the widest of the cobbled roads, nodding and raising his hand as the citizens of London in their thousands came to cheer and clap and dance in the roads after the great procession had passed by. Minstrels played and even the king could be seen tapping his feet within the stirrups.
Standing well back behind the excited crowds, Mabel, Belinda and Winifred peeped between the heads of those crowded in front of them, watching as his royal majesty, King Henry VIII made his glorious way to Westminster Abbey on the other side of the city. All the gates stood wide open, folk hurried out from the taverns and inns, raising their cups of ale to the bright young king, and toasting his good health and long reign.
“Yes indeed,” mumbled Winifred from the back of the crowd along Cheapside. “He’s young, red-haired and handsome, and quite slim too, though I’d wager that won’t last once he has all those feasts and cups of best wine.”
“It’s a shame we can’t get close enough to him for a nice warm kiss,” nodded Mabel.
Belinda cackled and waved her own hand to the king. He sat high on his beautiful black gleaming horse, keeping his speed slow in order that all his new subjects would have a chance to see how inspiring, grand and attractive he was. And they certainly appeared to agree. The previous king had certainly received no such accolade.
Everybody from young to old, from lord to beggar and from wealthy to baby, was dressed in their best. Winifred, Belinda and Mabel had no best clothes, and could only wear their big dark cloaks as they always did, a little stained unfortunately after all the years. But warm enough and hooded to keep their sad old faces in shadow.
“I wonder what our new king will look like in his crown,” murmured Belinda.
“You’ll never know,” Winifred answered. “We certainly aren’t invited into Westminster Abbey for the coronation. And after that, he’ll travel straight to the palace.”
“Ah well,” sighed Mabel. “We can dream. These special occasions are such fun.
“As long as we can join the feast,” added Winifred.
“Well,” Belinda pointed out, “No one is watching us, and no one will because they’re all too busy watching the procession and listening to the music. So we can creep in and feed all we want to.”
“Right,” Winifred said, pushing forward a little. “I want that woman over there in the pretty grey velvet dress. The one with the lace collar, and her neck well displayed. Then I’m going to move on to the man with the big nose over there – look. He looks perfect, he won’t even hear me sneak up behind him.”
“I think,” said Mabel, looking around carefully, “I like the very young man standing on the other side. He’s so excited he’s jumping up and down. He certainly won’t see me. Or perhaps I’ll trip him and then take my feed as I help him up, and he’ll just think I’m being kind. And his blood will be all simmering and fizzy from excitement. Then I’ll find someone else if I’m still hungry.”
Belinda grinned, mouth closed, hiding her vampire's teeth. “I want that fat woman with the basket of fruit. She’s fat enough to fill me in no time, and her gown is cut so low I can suck her neck without even a shadow in the way.”
“Now,” Winifred nodded. “Now is the perfect time. And we can meet up afterwards under the bridge. 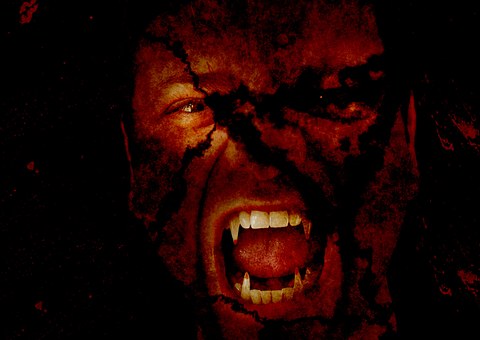 
Did you guess the song title?
UNDER THE BRIDGE by the RED HOT CHILLI PEPPERS

Barbara was born in Gloucestershire, England, and fell in love with the history of London. ears later, she moved to Australia. She has written fantasy and historical fiction. Very different genres, but all are crime mysteries in one way or another. She also has a children’s series (Bannister’s Muster series, for middle-grade children), no crime here, but a vibrant mixture of history and fantasy. After this is complete she is moving onto a series of modern crime mysteries.