The world of historical fiction is mourning the sad passing of one of our greatest writers, Sharon Kay Penman. To many readers she brought the world of the Welsh princes and the Plantagenets to life, and was forefront in casting a more sympathetic view of the life of Richard III.

I will not, here, repeat the facts of her life or career, which can be found on Wikipedia, (https://en.wikipedia.org/wiki/Sharon_Kay_Penman) instead, I would like to post a personal tribute to a kind, and generous lady, whom I had the privilege of knowing as a very dear friend and mentor.

I cannot remember the exact date, but it must have been between 1986 and  early 1987 that I came across Here Be Dragons in our public library. I was searching for something inspiring to read, having hit (another) writer’s block with my own attempt at writing a novel about King Arthur. I noticed a hefty tome on the shelf with a sword on its spine ... Arthurian? I read the back cover blurb: “Thirteenth-century Wales is a divided country, ever at the mercy of England's ruthless, power-hungry King John. Llewelyn, Prince of North Wales, secures an uneasy truce by marrying the English king's beloved illegitimate daughter, Joanna, who slowly grows to love her charismatic and courageous husband. But as John's attentions turn again and again to subduing Wales – and Llewelyn – Joanna must decide where her love and loyalties truly lie.” (taken from the 2012 edition). So, Medieval, not Arthurian. I’d heard of King John, but not Llewelyn. It looked an interesting read. 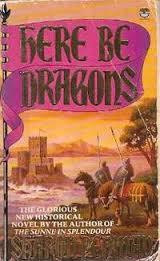 Which is possibly the understatement of a lifetime.

I loved that novel so much I wrote to the author, via the publisher (no internet back then!)  to say thank you for writing it, and how it had inspired me to keep going with my own writing. A few weeks later I received a handwritten letter from Sharon (sadly, I no longer have it). In it she thanked me for writing, asked if I’d be able to meet her for coffee as she would be in London again soon, and said, “If you can make a four page letter as interesting as the one you sent me, I cannot wait to read your book.”

I have never forgotten those words.

We duly met and ‘coffee’ turned into an entire afternoon of historical and animal related chat as if we had known each other forever, ending with Sharon asking me to send her the first couple of chapters of my attempt at a novel – although with the caveat that it might take her a while to get back to me as she was deep into writing her next book. (Falls The Shadow.) 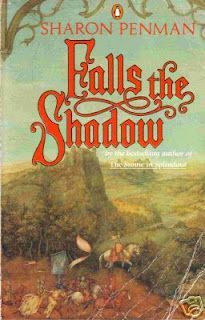 Her eventual response was to highlight where I was going right – and wrong. For one scene she said, "Oh, I wish I'd written a scene like that!". She made suggestions, encouraged me, in fact, over the next few months nagged me to keep going. Eventually, I managed to finish it and Sharon urged me to send the manuscript to her agent. Who read it, liked it, but told me I had enough to make a trilogy, so advised me to go away, do some serious re-writing, and then get back to her.

Sharon and I wrote to each other regularly, talking about our pets (I’ll never forget her delightful JZ), our research ‘adventures’ and such. Whenever she was in London we met for coffee, lunch, to visit Covent Garden,  the Museum of London... Both of us found it such a delight to ‘talk shop’ about writing and history.

In early 1993 my novel – now the first two parts of The Pendragon’s Banner Trilogy – was with ‘our’ UK agent. In the first week of April the agent telephoned me to say that another publisher wanted to take on Sharon’s books, but this would not be happening as she was contracted elsewhere – however, the agent offered them ‘Sharon’s protégé’.

Two weeks later,  I signed a contract with William Heinemann.

I have many happy and delightful memories of being with Sharon – trudging up the stairs together to our agent’s top-floor eerie, lunches full of laughter (and history), a delightful day at a Medieval Fair (I think somewhere in Hertfordshire) where she bought a pop-up book about knights for my daughter, who must have been about seven or eight. 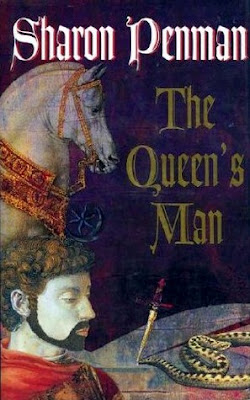 We continued discussing our writing plans in our letters. I had the great pleasure of ‘meeting’ her Queen’s Man Justin de Quincy, while he was still an embryonic character. When I had difficulty writing scenes about Duke William of Normandy, she suggested that I, ‘Think of something good about him.’ Her main, often emphasised advice: ‘Always make back up copies. And back ups of the backups. Even bury a copy somewhere.’ This was because she’d had her original (and only) copy of The Sunne In Splendour stolen from her car. She was devastated. (Wikipedia, I notice, says she could not write again for five years, I recall her telling me it was longer than that.) 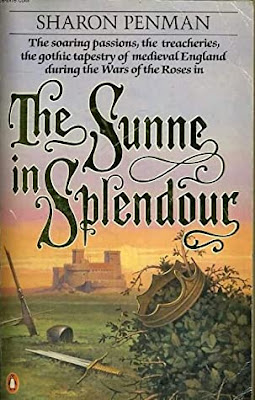 The highlight of our friendship, for me, was spending three days in North Wales with Sharon, who took me on a personal tour of her favourite sights. We trudged up the hill to visit Dolwyddelan Castle, we stood together to watch the torrent of magnificent water that is Rhaeadr Ewynnol, (Swallow Falls), followed by a very nice lunch in a nearby pub. We visited Beddgelert and discussed the legend – and our dogs – during a very pleasant riverside walk. Leaning against the walls of Criccieth Castle  we laughed about when Joanna burnt Llewelyn’s bed. A totally made-up event, but probably one of Sharon’s most memorable scenes.

Sitting with Sharon for breakfast on the hotel’s patio on a gloriously sunny morning overlooking the Welsh landscape, will always remain a treasured moment.
I am mentioning all this because I know that Sharon, since those early years of her own successful writing, has helped many, many aspiring authors to become successful writers, willingly giving up her time to befriend and encourage. I’m not sure if I was the first she helped, (if not, I was certainly among the first) but if it was not for Sharon’s enormous kindness, generosity and encouragement, I’m not sure that I would have had the courage, or impetus, to finish that first novel of mine, let alone send it to an agent or become a relatively successful author.
We did not correspond so much these last few years – lack of time and busy  commitments for both of us – but Sharon was one of the two authors (the other being Elizabeth Chadwick,) who wholeheartedly supported my decision to go Indie back in 2006. Nor did we have an opportunity to chat at a Denver conference in 2015 – I wish now that I had made the time.
It is because of Sharon that I am a published author. It is because of Sharon’s generosity that I, in turn, do all I can to encourage and promote good indie authors. It is my way of saying thank you to her.
Thank you Sharon, for your help, your enthusiasm, your eager support, and your wonderful novels.
We will all miss you.

My enormous thanks to author Liz Harris who was supposed to have had today as our featured Guest Spot, but kindly agreed to postpone her slot. www.lizharrisauthor.com

You are more than welcome to leave a comment below.