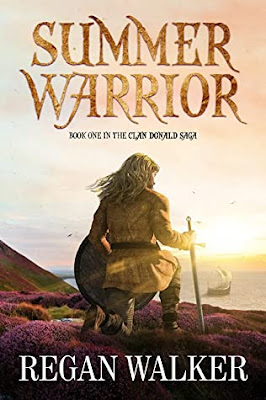 Amazon UK
Amazon US
Amazon CA
Amazon AU
Goodreads
Fictional drama
12th century
Scotland
"Somerled’s parentage was noble, of the Kings of Dublin, the royal house of Argyll and the great Ard Ri, the High Kings of Ireland. But when the Norse invaded Argyll and the Isles, his family’s fortunes fell with those of his people. All hope seemed lost when he rose from the mists of Morvern to rally the Gaels, the Scots and the Irish. Sweeping across Argyll and the Isles like a fast-moving storm, brilliant in strategy and fearless in battle, Somerled began retaking his ancestral lands, driving away the invaders and freeing the people from the Norse stranglehold. In doing so, he would win the title Somerle Mor, Somerled the Mighty, Lord of Argyll, Kintyre and Lorne and, eventually, Lord of the Isles. This is the unforgettable story of his path to victory that forged the Kingdom of the Isles and won him the heart of a Norse king’s daughter."
Somerled is a historical character who is relatively unknown in popular literature, but one who had a significant and lasting influence on the politics and history of Scotland. In Summer Warrior, Regan Walker gives us a portrayal of a young man driven by vision and ambition, but also an empire-builder with a human face.

In the early 12th century, Somerled, son of GilleBride, an Irish Gaelic leader with royal connections, rose to the leadership of the territories of Argyll, Lorne and Kintyre, historically the territories of the Dalriada. The entire area of what is today northern Scotland and Ireland was (and had been) contested and divided among Irish, Scottish and Scandinavian rule for many years, creating a Norse-Gaelic cultural and genealogical continuum. The historical Somerled and his family made marital alliances among many of the ruling houses of the time: Somerled himself married, in 1140, Ragnhild, daughter of Olaf Godredsson, King of Man and the Isles.

It is this period of Somerled’s life, his rise to the Lordship of Kintyre, Argyll and Lorne and his courtship and marriage to Raghnild, that is central to Summer Warrior. Walker weaves the history of the times and the many historical characters involved into the story seamlessly, informing the reader (and sometimes reminding them) of the events and personalities, but not overwhelming them with information. Lots of action and plenty of politics keep the narrative moving forward, while the romance lightens the mood and creates opportunities for Somerled to be seen in a different light.

The alliance between Somerled and Olaf Godredsson cemented by the marriage to Olaf’s daughter would have likely been a pragmatic agreement; such was the role of a king’s daughter. Walker doesn’t gloss over this: Raghnild is aware she is a political prize. But there is no reason to not believe she found Somerled attractive, and he her, and that their marriage was more than a political alliance.

I was also pleased to see that Somerled and others are presented as literate and multi-lingual, an aspect of the early medieval elite that is sometimes ignored. Contact between this far northern world and the rest of Europe (and beyond) brought not only changes in worship and ideas, but changes in material culture through trade.

Eminently readable, Summer Warrior – the title is a translation of the Norse ‘Sumarliði’, likely Somerled’s true name,  is both entertaining and informative; a book to be enjoyed.