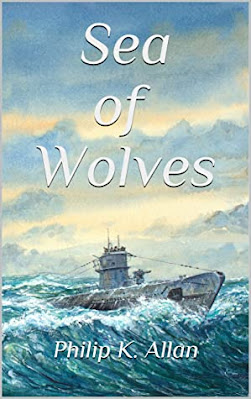 "1941 and the fate of the world hangs in the balance. Across the stormy North Atlantic battle rages between wolfpacks of U-boats and escort ships fighting to protect the Allies’ vital convoys. Meanwhile teams of codebreakers at Bletchley Park struggle to penetrate the German Navy’s Top-Secret Dolphin code, and unlock the flow of vital intelligence that will swing the battle in the Allies favour. Sea of Wolves plots the lives of three people caught up in the centre of the battle. Vera Baldwin, a young crossword-enthusiast, lifted from her quiet suburban life and thrown into the middle of the greatest codebreaking effort the world has seen. Otto Stuckmann, the rookie commander of U70, a German naval veteran struggling with the ceaseless demands being placed on him. Leonard Cole, the newly appointed first lieutenant of HMS Protea and a man with unfinished business to resolve. Each is unknown to the others as their fates spiral around each other, touching and twisting towards a final encounter that will change their lives forever."
As an ex-mariner, I very often shy away from reading any fiction set on ships. However, one of my favourite novels of wartime naval action was The Cruel Sea. In fact, I first read it before I even made my maiden voyage. And while I was always Merchant Navy, I had enough relatives with sea time on the Grey Funnel line to know a bit about life afloat in the times of this story.
Submarines are another thing entirely. Having visited one, I can appreciate the sense of claustrophobia in normal life, even before you are being depth-charged and forced to dive deep underwater to try and survive.
I digress. Sea of Wolves is a fascinating story, a tale of three parts, based on events that actually took place. While initially, the stories appear to be connected only by the thread of war, as the tale develops, we begin to see them join in more detail, as the battle for supremacy in the North Atlantic swings one way, then the other. The great skill in writing this sort of story lies in using the facts as a basis for the fiction, and in blurring the line between the two. So that, in the end, you cannot be certain which bits did happen and which might not have.
And this book does it perfectly.
We have the war seen through the eyes of an officer on a Corvette, a German submariner and a female code-breaker from Bletchley Park, with each one’s actions having repercussions in the worlds of the others. Some foreseen, others only realised after the events that they sparked.
The action moves smoothly between each of the stories in a way that made sense, as one person’s actions affects the other players in the greater scheme of things. It would have been easy to exclude the work of the shore-based codebreakers and just concentrate on the battle between surface ship and submarine; the story greatly benefits from showing how the people behind the scenes can have just as much effect on a battle as a well-aimed torpedo or depth charge.
Life on a small submarine is expertly portrayed, with tension, a sense of imprisonment, urgency and the unrelenting presence of the threat of imminent demise well told. Life on the floating cork that a Corvette became in bad weather is also perfectly described. Not forgetting the atmosphere on shore, the pressure to break a code and save lives, yet still have some sort of existence, even find a little romance, is pitched well. These people might not be in the thick of the action, but they are no less subject to the pressures of war.
Overall, I enjoyed this novel immensely, it gave me an entertaining and very immersive picture of the lives that these brave people, on both sides, led. And the fiction fitted the facts; what was told became what might well have happened.
Coming back to the reason why I read so little naval fiction... there can be a tendency for authors to get the basic technical details of ships wrong. I’m glad to say that I didn’t find that problem here. Not everything might have been true, but it certainly sounded true.
I will definitely be investigating more of this author’s work.
Reviewed for Discovering Diamonds