A Story Inspired by a Song by Anna Belfrage

Anna says: “When I listen to this song, I mostly hear the despair, the pain that so often accompanies love. It’s not easy to have your entire existence depending on another person…”

He never said it. She waited and waited, she told him often enough, but he didn’t reciprocate. Nope. And while at first she could convince herself it didn’t matter—not really—over time insecurity crept in. He was so self-contained. Did he need her? Love her? Of course he did, she told herself. He showed her all the time, she added, squashing that little voice inside of her that whispered that maybe he didn’t love her. Not like she loved him. At times, she wondered if he even noticed her. It seemed to her that as the weeks became months, became years, he regarded her more as a convenience than as the love of his life.
But she persevered. She held him at night, set plates of hot food in front of him when he came in from yet another day’s hard work. She kept their little home neat and scrubbed, she made sure his clothes were clean, the sheets were changed. Not the life she had imagined. Not at all.
Sometimes, she’d steal some moments for herself and stand in the scant shade offered by their home and pretend. Some moments of gliding gracefully over the ground, arms held high over her head as she twirled and danced. Once, she had dreamed. Of fame, of limelight, of a new life out west. And then she’d fallen in love. She sighed, halting mid step through one of her dance routines. What was the point? 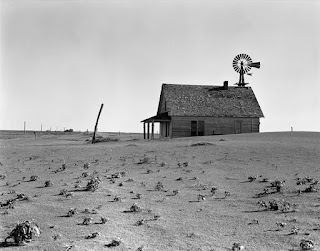 He never said it. He knew that she hoped that he would, but to set words on the feelings that so often clogged his throat—especially when he’d see her dancing in the shade, a creature of so much light and grace—no, he just couldn’t. Besides, there were other ways of showing her, right? He loved her at night, he handed over his pay check to her every other Friday. And when she gave him a son, he was struck so mute by emotions he went out and cut off one of her precious white roses, hoping she would understand what he tried to convey with the flower.

Life went on. He wished he could give her—and the boy—more. He worked harder and harder, but failure dogged him and instead of steak and fries they ate a hell of a lot of beans. He wanted to give her the world but ended up handing her a shovelful of dirty earth. It made him feel less of a man. He no longer loved her quite as frequently, convinced as he was that she was disappointed in him, that in secret she wished she had found another man.

One day, she’d had enough. She was sick and tired of living on the periphery of his life, of him not trusting her enough to share his fears, his frustration, with her. And he still hadn’t told her that he loved her, needed her, wanted her. These days, she no longer knew if he did. At night, he rolled over on his side and presented her with his back. During the days, he was mostly gone and come the weekends he’d escape into home repairs. They never spoke—not properly. At times, she caught him looking at her, and she knew for a fact that he’d sneak out to watch her dance. These days, she mostly stole moments at night, when the baby was asleep and he slouched on the couch, watching yet another TV show featuring kick-ass investigators.

So one morning, she stood up and blocked his way to the door. “I’m leaving you.”
“Leaving me?”
For a moment, she saw something akin to desperation on his face. He recovered. “Hoping to find something better than this?” he asked sarcastically, making a sweeping gesture.
“Maybe.” She gnawed her lip. “I just can’t…”
He nodded, stepped round her and disappeared outside. She leaned against the door and struggled hard not to cry. He obviously didn’t love her, she thought, as she heard his truck drive off.
She packed. A slow folding of her few garments, of her son’s few tees and jeans. The boy was playing outside, crouched in the sun as he dragged his toy truck back and forth. He didn’t say much either, but when she picked him up he smiled and pressed his downy cheek to hers. Her man used to do that too, except in that case it was him picking her up and she pressing her cheek to his bristling one. She wiped at an escaped tear.

The bag was packed. She turned off the lights, checked the taps. She propped up her note on the kitchen table. Everything was as neat as always. She ran her hand over the scarred countertop. Yet another tear plopped down on the dark wood. She had tried, she thought, God knows she had tried to love him. She bit her lip. Tried? She did love him. But to love and love and not know if you were loved back, it was like watering a plant only to discover what came out of the ground wasn’t a rose but a prickly cactus.
One last time of turning the key in the lock. She slipped it under the terracotta pot that held her huge agave. He’d know to look there. And then she held out her hand to her son. Without a word, he hurried over to her, small sticky fingers clinging to hers. They walked down the dusty lane towards the road and the distant bus stop.
The road wavered in the heat. There came the bus, and she looked the other way, hoping, hoping that she’d see his truck come barrelling towards her. But it didn’t. She helped her son up, paid her fare. The bus doors closed. She sat in her seat and held her breath to stop herself from crying.
A roar, a honking horn and his battered truck screeched to a stop, blocking the bus. He banged on the door, leapt up the steps.
“Don’t go!” he yelled. “Damn it, don’t go! Don’t leave me, sweetheart. Don’t…” He inhaled, looking at her with such despair she didn’t quite know what to do. “I’ll do anything,” he went on. “I’ll take extra shifts, I’ll…”
She held up her hand. “Not here,” she said, and she could see hope flare in his eyes when she apologised to the driver and disembarked. They stood silent as the bus drove off. She released her son to play along the verge.
“I mean it,” he said. “I can’t…” he scrubbed a hand through his hair. Too long: he needed a haircut, and his jeans were too worn, the cuffs on his shirt frayed. “Without you, I can’t cope,” he admitted in a low voice.
“Cope?” She shook her head slowly. “Is that all I am to you? A support function?”
“What?” He blinked.
“You tell me you can’t cope and that’s supposed to be enough? Well, guess what, it isn’t.” Angrily, she wiped at her eyes. “Not once have you told me that you love me,” she added in a more controlled voice.
“Oh, for crying out loud!” He fell to his knees before her. “Of course I love you! You’re the single most important thing in my life. But sometimes I wish we’d never met, that you’d been fortunate enough to find someone else to pin your hopes on, someone who could have helped you realise those dreams of yours. Me, I just ground them underfoot.” He ducked his head, staring intently at the gravel. “You’re way too good for me, Susannah.”
The sun beat down. A rush of wind caused the dust to rise in swirls around the penitent shape of her man. Slowly, she sank down to kneel before him. A hand under his chin and he lifted his face to meet her gaze. “You love me?”
“Endlessly. Forever. I thought you knew that.”
“I do now,” she said, getting to her feet. She smiled at their son. “Want some ice cream? I think there’s some left in the freezer.” The boy grinned and ran off up the lane. She held out her hand to her man. “Coming?”
“Yes ma’am.”


Song: For crying out loud, you know I love you – Meatloaf/J Steinman 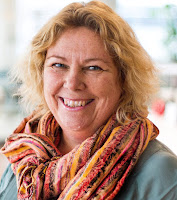 About Anna
A Discovering Diamonds reviewer and author

Had Anna been allowed to choose, she’d have become a time-traveller. As this was impossible, she became a financial professional with three absorbing interests: history and writing.
Anna has authored the acclaimed time travelling series The Graham Saga, set in 17th century Scotland and Maryland, as well as the equally acclaimed medieval series The King’s Greatest Enemy which is set in 14th century England. (Medieval knight was also high on Anna’s list of potential professions. Yet another disappointment…) 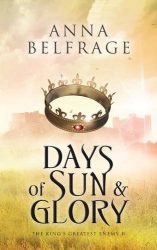 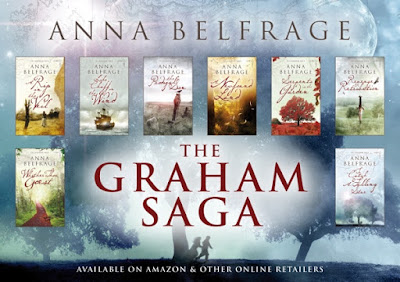 Find out more about Anna by visiting her website, www.annabelfrage.com
Or her Amazon page, http://Author.to/ABG