A Story Inspired By A Song by Katherine Pym

Life is gentle. The fish are biting.
Violet Snodgrass unfolded her wings and flew from the narrow, bell shaped flower. Pollen-laden stamens tickled her toes as she glided by. Sunshine warmed her head. She fluttered over their fairy village, a field of wild flowers that bordered a cotton field. She laughed at the children who giggled as they tumbled leaf-to-leaf. From open flowers, fairies waved at her when she passed. She floated toward the pond and soon found her chums on an old tree stump.
“What are you doing?” she asked when her feet touched the mossy wood.
“We’re going fishing,” Thorn announced, his black eyes gazing at the still pond. Short tempered, his words could stab an unsuspecting fairy into sudden flight.
“We found this long stalk with shrivelled flower petals at the end.” Marigold waved it above her head. Her button mouth curled into a pert grin. “The fish will love the taste.”
Her voice carried over the pond. A fish jumped. Water splashed.
“We don’t eat fish,” Daisy said, her fair skin bright in the sunlight.
Thorn raised the flower stem like a battle-pike. “It’ll be fun. We shall conquer this pond, and enslave the fish.” 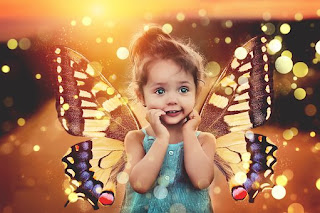 My daddy has plenty. My mama is beautiful.
“Our parents will be cross if we torment the shy beasties.” A cautious lass, Azalea’s namesake only flowered for a short time each spring. She must live her life carefully.
Leif shook his head. “We’ll only coax them to the surface and talk to them.”
Violet smiled at the gentle lad who loved to explore tree roots for the crawly things they provided.
“How will you do it?” Camellia, the sweetest of them all, ran her finger down the bent stalk that would be their fishing rod.
“From the lily pads. The fish live under them. Who’s coming with me?” Thorn flew to the lilies and settled on a pad. He sank to his knees and looked into the water. “Hey, there’s something down there, and it’s big.”
Everyone flew to the lily pads. Violet wondered what could be under the water, for they rarely saw anyone from outside their world, except when the big people planted or picked cotton, a gruelling job by the look of it.
Burr dunked the flower into the pond and waggled the shrivelled petals. Insects swarmed, then settled closer to the water. Suddenly, something big rose to the surface. His snout emerged to nibble the insects. He sank, again, to the bottom of the pond.
“Oh no! A trout,” Burr cried as if frightened. “They eat fairies.” He smirked and Violet frowned. His prickly wit annoyed her most of the time.
“I’ve never heard that.” Daisy took a step backwards, her heel on the edge of the lily pad.
Burr waggled his brow. “They do.” He pushed the stem deeper, wiggling it in front of the big trout. 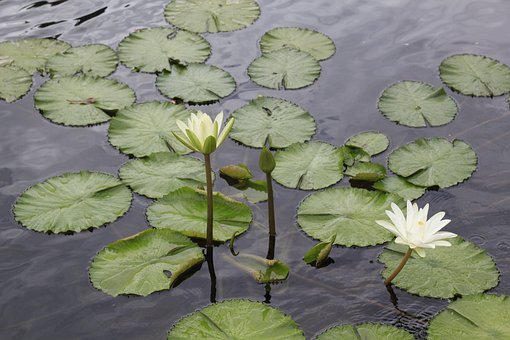 I will be strong. I will not cry.
“You are trying to scare us,” Violet snapped.
“Ha!” Burr jumped up and down on the pad.
“Stop it. Stop it right now,” the fairies cried. “You’ll make us fall in the pond. Our wings will get slimy.”
He fell on his back, laughing and kicking his feet. Wilted petals floated in the pond. Insects danced in a cloud above the water.
The big trout’s snout broke the surface. He bit off the soggy petals and chewed. Burr jumped to his feet, his curly red hair in sharp spikes about his head. “Why did you do that?”
The fish gazed at them, his eyes sad. “Why do you torment me? I am the king of trout, and this pond is my castle.” He spat a bead of water. It arced and hit Burr on the nose.
He scrubbed his face. “That wasn’t nice.”
“Burr, you are not nice,” Violet scolded. She turned to the king of trout. “How big is your kingdom?”
He waved his fin and water rippled. “My kingdom is as far as you can see.”

I rise on the morning mist, and sing.
Violet fluttered into the air. The area lush with trees and flowers, a stream bubbled from the pond, a path that flowed beyond reach. A gate of treacherous rocks protected the entrance, with a big fish guarding all who would enter. Many waited at the gate, their tails swaying in the current.
She flew back to the lilies where the king of trout spoke in a low, rumbling voice to her chums. They sat on the pads and listened intently to his majesty’s wisdom.
Her eyes met King Trout’s. He nodded at her.

My wings will take me into the sky.
“My kingdom protects your kingdom from the pixies that live in the moorland beyond this pond.”
“And our kingdom protects yours,” Leif interjected. “We keep the bears and humans away so that you may live in peace.”
Violet smiled. She remembered Dad telling her this one evening as they sat down to a supper of nectar and seed cakes.
The king of trout regally nodded, then he took a bite of swirling insects. He winked at Violet.
As if the fairies suddenly realised the danger, they jumped to their feet. Their wings buzzed and whirred. “Pixies are wicked creatures. They tease everyone.”
Fat tears dropped onto Camellia’s pale cheeks. “I want my mum and dad.”
“But we need their pixie dust to fly.” Azalea’s wings thrummed. Sparkling dust flowed from gossamer feathers.
Burr and Thorn stood with their wings tucked together; their fists jabbed the air. “We’ll protect you.”
King Trout banged his tail on the muddy pond floor, summoning his army. Soon, the water darkened with sleek bodies, side-by-side, heads-to-tails as they gave homage to their king.
“The pixies will come soon,” his majesty calmly said, his snout and eyes surrounded by other noses and eyes. 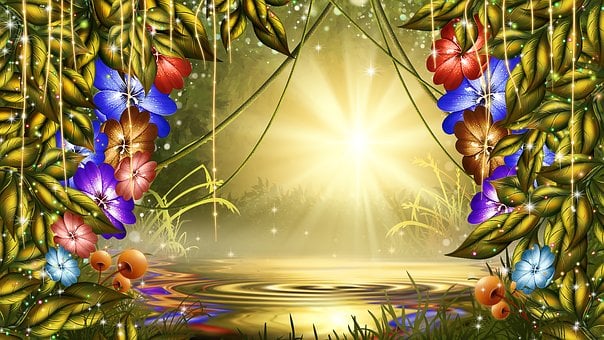 I am safe with my daddy and mama at my side.
The bright sun dimmed as a cloud of chattering pixies rose in the sky. Their sharp teeth glistened, their beady eyes full of mischief, they swooped over the pond, menaced Violet and her friends.
Trout soldiers jumped out of the water, their jaws snapping at the pixies, who screamed and laughed. They swiped at the fish’s snouts, grabbed Violet’s and her friends’ hair and clothes. The trout spat pebbles at the pixies, who leapt out of the way with shouts of glee. Pixie dust rained on them, fell into the water and onto the grasses that lined the pond.
Fairy adults swept into the fray. They fought the pixies with their wands. Sharp petals poured over the pixies who brushed them away. “We like heather, not these spikey flower petals. Stop. Stop, we say.” They shivered and more fairy dust fell.
Shamans and priestesses held diaphanous veils aloft to catch pixie dust. When piles and piles of sparkling dust filled the veils, ready to drop off the edges, and into the pond, they lugged away their catch.
Violet’s father and mother flew over them, Dad’s arms outspread. “Halt!”
Mum smiled and nodded.
The trout and fairy realms grew tired and frail in the gathering dusk. Pixies floated above the pond. Fairies fluttered about the grassy verge, their breaths heavy from battle. The trout army sank beneath the surface, their ripples producing little waves onshore.
Violet sank onto the lily pad and smiled at her dad. Proud of him, she wanted to fly into his arms for a gentle hug, but as their leader, it would have to wait.
“This battle is finished. We will now go to our dinners of berries and perfumed honey.” With confidence and pride, her parents’ larger than normal wings took them away from the lily-pond. They led the way to their village in the flowers that surrounded the cotton field.
Violet’s wings took her into the air. They buzzed her past the villagers to her father where she took his hand.
He gave her a little squeeze and a wink. “Well done, sweet daughter. Well done.”

song: Summertime from  Gershwin's opera Porgy and Bess
original lyrics by DuBose Heyward, the author of the novel Porgy on which the opera was based.

Katherine Pym enjoys travel, and shares her time between Seattle and Austin with her husband and puppy-dog.

Katherine's blogspot
Facebook
Amazon UK
Amazon US
Note: There is copyright legislation for song lyrics but no copyright in names, titles or ideas
images via Pixabay accreditation not required