A Story Inspired By A Song ...by Helen Hollick 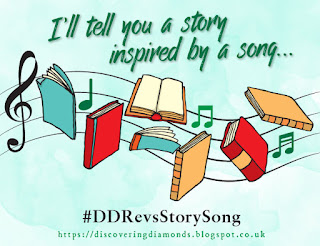 The final story...
Discovering Diamonds sincerely hopes that you have enjoyed our Christmas Interlude of
stories inspired by a song

It was one of those weddings, you know, dozens of people you ought to know but have no idea who they are beyond the groom and his mum and dad. At least, thank God, I hadn’t been asked to be Best Man, even though the groom and me had been mates for oh… centuries. Well, OK since those first miserable days at secondary school when we soon learned that to lark about meant being shouted at by Miss Grime. Awful woman – there ought to be a law against allowing psychopaths to be teachers.
The service itself was lovely, and I’m not ashamed to admit that I had to surreptitiously wipe a tear away as the couple exchanged their vows. He was so serious, she, so utterly beautiful in her white dress that sparkled as if a shower of diamonds had been sprinkled over it. Which I guess they had, although they weren’t diamonds of course, just glittery sequin-type things. The huge feast after those interminable photos had been taken was scrumptious, though the speeches were the usual 'we’ll-all-pretend-to-be-interested' affair.
Yet again I was pleased that I hadn’t been asked to be B.M, the groom had blackmailed some other poor sod who, apparently, had been responsible for the couple meeting. That’ll teach him to play cupid.
I’d noticed Cindy, as I discovered her name to be, in the church, sitting at the far end of a pew on the bride’s designated side, her face was hidden by a tumble of silver-blonde hair cascading down over her shoulders. She seemed to be on her own, and by pure chance I ended up standing next to her in those ‘everybody smile’ group photos. She was gorgeous. Eyes as blue as sapphires, matching the blue silk dress that complemented her elegant figure. Long legs going down to a pair of red high-heels that were decorated with flowers. Her mouth twitched into a smile when I spoke to her – I’d made a joke, one of my usual rather pathetic ones, but she still laughed. And I, not by chance, because I'd nipped in and swapped the name-place tags around, sat next to her during the meal. We talked, found that we laughed at the same things, enjoyed the same music, same TV dramas – she didn’t care for roast spuds though, so I swapped them for my carrots. Probably explained why she was slim and I am a tad... let's say 'portly'.

Once the grub was finished there was that lull before the party proper started. I got Cindy a drink from the bar – white wine – and we wandered out on to the hotel terrace. It was a glorious afternoon, bright sun, a warm breeze blowing off the sea that shimmered at the bottom of the steep cliff beyond the hotel’s grounds. Quite a few people trundled down the zigzag of steps that descended to the  beach below, but I was happy to sit at one of the picnic tables chatting with Cindy. I asked if she was named after the model or the doll, she never actually answered, although she did point out that the British version of Barbie was Sindy with an S not a C.
It’s strange, isn’t it, how you can meet with someone you have never seen before but instantly feel you’ve known them forever? I guess some people romantically call it ‘love at first sight’. I don’t know about that, but I did feel that we belonged together.
We had a couple of dances when the hired disco started up, but neither of us were keen, so we went back to our table on the terrace and watched the stars coming out, as if millions of candles were being lit across the black velvet arc of the sky.
She went to the loo and I had this sudden fear that she wouldn’t come back – almost followed her but made myself sit, and wait. I was being silly, she came back carrying a plate of sandwiches and 'nibbles', plonked them on the table and said she was going to fetch us another glass of wine each. Maybe it was because it was now dark and the fairy lights dotted everywhere weren’t very good at illuminating the path, but she tripped and fell on to her knees. I ran to her, picked her up, no damage apart from a bit of a graze. She laughed, her smile reaching through to my soul as I squatted next to her, ensuring she was OK.
“I’m fine, just embarrassed,” she said. “It’s these shoes, I’m not used to wearing heels.”
She stuck out her foot, showed me the red shoe patterned with little coloured flowers; the ridiculously high heel.
I wanted to answer her I’ll always be here to pick you up when you fall, but I didn’t. There was a lot I wanted to tell her. But I didn’t.
We  devoured the food, sipped our drinks and talked about serious, general things, putting the world right; the arrogance of politicians, the indifference of so many towards homelessness and prejudices, that sort of stuff. Then we talked about our hopes and our dreams and things that weren’t so great in our lives – she’d been hurt in the past, so had I, both of us clinging to those souring relationships because it was habit, reluctant to admit that it was over. She admitted to depression, that she would just sit and sob for no reason. I wanted to tell her that I would be willing to be there, to stuff my fingers in my ears when she felt like screaming, to let her cry, let her release the despair and hold her tight, to just be there with her, or at the very least, be there at the end of a phone if she wanted to talk. I knew what it was like, you see, to not admit that things were going wrong, to be so close to breaking but not wanting to face the fact that something was already broken.
It sounds depressing doesn’t it? But it wasn’t, we talked because we'd clicked. I’d found my soulmate. Or I thought I had. 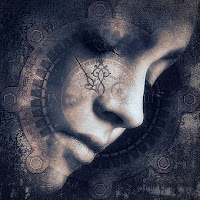 It was getting close to midnight, they were starting to play those ‘last waltz’ type tunes for the older folk and those keen-types who are hooked on 'Strictly' on TV.
“I have to go,” she said, “I shouldn’t really be here.”
I was disappointed, but, well, it had been a great evening. "I'll walk you to your car," I offered, playing for time.
She looked, I don't know, alarmed? Even frightened? "I don't drive,"  and added in a quiet whisper, "I came by coach."
I must've heard wrong, I hadn't been aware of any coaches being laid on, and I knew the companies didn't come to this neck of the woods because of the narrow lanes.
“Who’s taking you home, then?” I frowned. I was staying at the hotel, all part of the wedding invitation. I'd had too much to drink to offer to drive her. "I can phone for a taxi. There's no public transport around here."
She didn’t answer, but she looked up at me, those blue eyes filling with tears. Then she turned and ran away, literally, running down those steps to the dark beach below. I followed, calling for her to wait, cursing below my breath that I was a little off-balance because of having too much to drink. I reached the sand, stepped into a pile of broken fruit that some thoughtless bugger had dumped there – don't laugh, it looked like a broken pumpkin. Someone growing them amongst the dune scrub for Halloween? There were a couple of mice nibbling at it would you believe! Then I saw two sand lizards scurry away. No one was there though, no one at all. I had no idea where she had gone. No idea who she was, where she had come from, where she had gone to.

I asked the groom and his bride, when they came back from the honeymoon, asked them about the girl with the silver hair, blue dress and red shoes. They didn’t know either.
I went through every photograph, watched every video.
She wasn’t there in a single one of them. Where she should have been standing next to me, laughing, there was nothing but a blurred space. I guess there must have been something wrong with the photographer's camera? Weird though. I concluded that she must have been a gate-crasher, or perhaps she had been invited as a 'plus 1' with a partner who had let her down? Or...

Well, I don't know why or how she was there, but I do know that I will search for her. I will go on looking, for I want to take her home and love her, but all I have of her, until I find her, is one red shoe with a snapped heel. Her shoe that I had found at the bottom of the steps.
One shoe that has, what I assume, is the maker’s name stamped inside.
Cinderella. 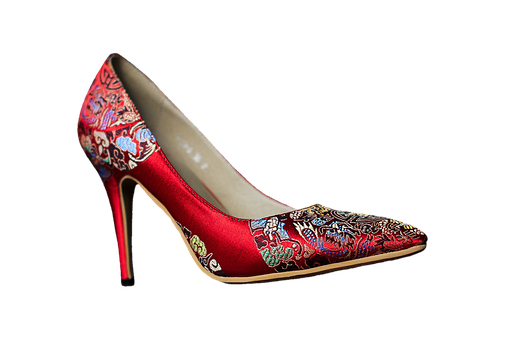 song: Drive : by the Cars

link to lyrics
about the author 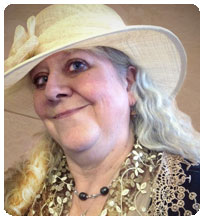 Helen lives on a thirteen-acre farm in North Devon, England. Born in London, she wrote pony stories as a teenager, moved to science-fiction and fantasy, and then discovered historical fiction. Published for over twenty years with her Arthurian Trilogy, and the 1066 era she became a ‘USA Today’ bestseller with her novel about Queen Emma The Forever Queen (UK title A Hollow Crown.) She also writes the Sea Witch Voyages, pirate-based nautical adventures with a touch of fantasy. She has written a non-fiction about pirates and one about Smugglers In Fact and Fiction, due to be published in 2019


Helen is the founder of Discovering Diamonds 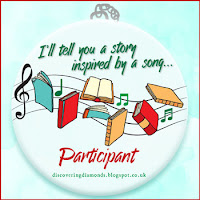 If you want to go back to our first story...
CLICK HERE 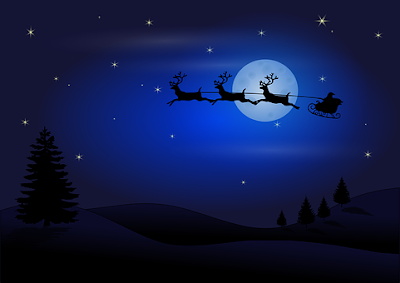 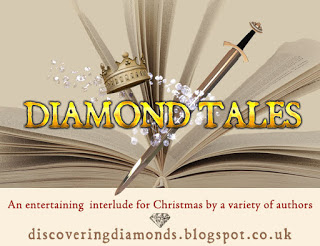