A Story Inspired By A Song by Angela MacRae Shanks

Some say I’m mad. Others, most I fancy, say I’ve been bewitched … enchanted. My heart and mind’s been turned. If love is a manner of madness, a bewitchment, and it’s known love can turn a man’s head, can lead him to … well, I’ll leave that for now. Then it’s true. I am so. Madly bewitched. Heart and mind and flesh. But upon my oath, I never meant to be.
’Twas early summer when we first met and the trees were blooming, heady and sweet. Rowan and birch, cherry and haw – hardy highland trees all gnarled and silvered with lichen in the pure mountain air. And though the blooms werena so much to look at, the fragrance now ... that could lift a man’s heart as only sweet highland air can do.
I climbed the mountain for a last lingering look across the glen, up among the heather and wild thyme, for on the morrow I’d join my regiment and we’d all march away. The Highlands were risen in arms against the king, were astir with rebellion, and we were charged to quell it. Yet my heart wasna in it. It beat heavy in my chest knowing kin would fight kin, and I would need to do the same.

On I climbed and left the last few twisted trees behind when I came upon her kneeling in the heather gathering herbs. I’d seen her before; I knew who she was. Who did not? For she was beautiful as a fawn is, all soft brown eyes, fringed and gentle, peeping from a sweep of conker-brown hair. 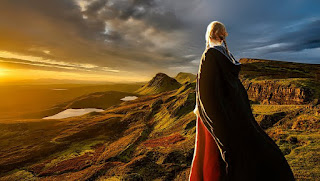 Catriona. I’d heard talk of her, that she was mysterious, hard to get close to, yet there was scarce a lad in the glen that didna wish to try. Lady of the woods they called her, for she was said to spend her days in glades and upon hillsides gathering nature’s bounty, creation’s medicine. Making balms for the sick and wounded. What chance had I with such as her? Me? Andrew Gow. Humble cottar from Strathavon with naught to my name but a scrape of land and a rental I’d no hope of paying. ’Twas why I took the king’s shilling. That or eviction.
She eyed me intently from among the fragrant herbs. ‘What brings ye up the mountain, Andrew?’
My heart leapt that she knew my name. ‘I wished to take my last farewell of the glen.’ I spoke the simple truth. ‘And ’tis from here ye see the grandest sweep of river and hill.’
She nodded, curious as a kitten. ‘So, where is it ye’ll go, then?’
‘Wherever I’m ordered. To battle, I suppose, for king and country.’
She rose then, and I saw what I took for respect in her eyes. She came closer, close enough to admire the perfection of her skin, to count the freckles under her eyes, smell the sun-baked pine needle scent upon her. ‘Which king, Andrew? Will ye don a coat o’ crimson?’
I nodded. ‘Aye, the king that sits upon the throne o’ this realm.’ But I knew as I said it, ’twas not what she wished to hear. ‘The king of Hanover.’
‘Nae the true heir, then? Ye’d fight for the usurper?’
The respect I’d imagined in her eyes seemed to dull and lose its shine, and she lowered her head, unable to bring herself to look at me.
‘’Tis he who’ll pay me a decent bounty,’ I muttered, loath to admit such a thing. ‘I’m needing to pay my rent.’
She nodded, but I could see the disappointment in every fibre of her, and it wrenched my heart to see it. I swallowed, sick to my soul. ‘What else would ye have me do?’
She looked back up at me, and I was lost. When she gave me her hand, it was not me that took it and led her to lower ground. To the soft mossy pasture between the trees and laid my plaid for her to lie upon. It was some other, braver man. Not me. It was some stout-hearted Jacobite who loved her that day and he who knew the warmth of her skin, the softness of her mouth. And ’twas he who came gently to her and lost his heart among the wild mountain thyme. 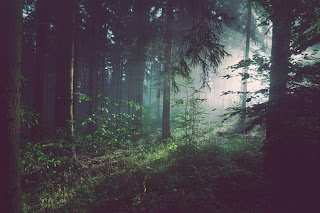 Later, she looked at me, then lay back and brushed an insect from her chest, gazing through the hazy sap-green canopy to the wide sky above. Peace, such peace. She pressed my hand and whispered, ‘Andrew,’ and I knew I was bewitched. Clay to her hand, for I’d have given all I had right there and then to stay by her side.
‘Will ye build a place fer us Andrew, here upon the mountain?’ Her face was all a-flush.
And so ’tis what I did. I built her a leafy bower by a cool mountain stream where the sparkle of water, silver in the sun, drew me even more surely under her spell. A place for our love and around it I laid all the wildflowers of the mountain, though none as wild or rare as her.
And so, ye see, there is this word – Catriona – and ’tis all that filled my head. So loath was I to leave her, I tarried long by her side. Lord, all I wished was to love and to know the love of her, but as time passed another word came to me, and then another and another. First came deserter. Then traitor. And finally fugitive. And I knew I was all these and more.
Yet not thon other, braver man. He was none of these, for he was a fearless Jacobite, daring and true. But for me, Andrew Gow, I was all that and more. Wanted was another word that later came to me. When they’d take me I’d suffer not a soldier’s death by shooting but the miserable shackled one of a felon upon the gibbet.
And so, in truth, I was bewitched … enchanted, for a madness surely took me. A madness I call love. She turned my heart and mind, and Lord, my flesh, so I am now reborn. I am thon other, braver man – a stout-hearted Jacobite – and another word is in my head. Turncoat. For my coat’s no longer crimson and I do wear a white cockade upon my breast. 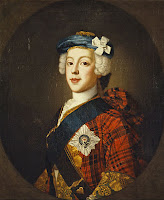 She pinned it there and smiled a gentle smile, then let me take her hand.
‘Catriona,’ I softly whispered, ‘will we go, lassie?’

And so we did. Together we joined the growing stream that’s become a sweeping tide across the Highlands, and swore our allegiance to the bonny prince. 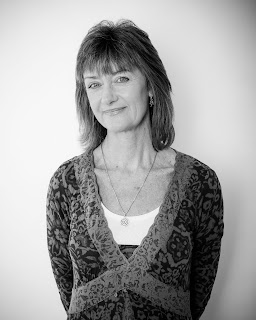 Angela MacRae Shanks was born in Garmouth, a village near the mouth of the river Spey in north-east Scotland. She still lives near here with her family and two cats. Her love of Scottish history began at an early age, perhaps piqued by an intriguing plaque on the adjoining cottage marking the spot where King Charles II signed the Solemn League and Covenant on his return from exile in 1650.
A fascination with all things Celtic and Highland, added to her training in aromatherapy and complementary therapies, spawned a need to weave herbal lore into her tales. Those who healed using plants and the wisdom of nature, usually women, were often branded witches, and this added more rich fodder to the mix.
Belonging to Moray, malt whisky country, uisge-beatha, the water of life, and its illicit past has always interested her, and she thought it high time someone wove the history of the spirit into a work of fiction.

Her debut novel, The Blood & The Barley is the result of this mix.
Find out more: