A Discovering Diamonds Review of Luminous by Samantha Wilcoxson 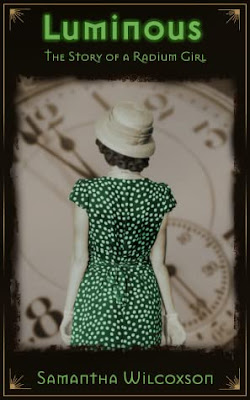 Biographical Fiction
1920s
USA
"Catherine Donohue's life was set on a an unexpected course when she accepted a job at Radium Dial. The pay was great, and her co-workers became her best friends. But a secret was lurking in the greenish-grey paint that magically made things glow in the dark. When Catherine and her friends started becoming sick, this shy Catholic girl stood up to the might of the radium industry, the legal and medical communities, and townspeople who told her to be quiet. Would she be too late? Catherine's quest for social justice in the era between World Wars is emotive and inspiring."
I had not heard of this story until this novel came to my attention. After I'd finished reading it, I looked up Catherine Donohue and the other 'radium girls' and the fact that one is able to see astonishing and deeply upsetting images really brings it home that this is a true story. I can imagine the author of the novel wondering why it hadn't been told in fiction form before now, when it is a story crying out to be told, and Ms Wilcoxson is to be commended for correcting that omission.
It must have been a difficult problem though: just how to fictionalise it? And where this book succeeds is in conveying the bitter contrast between the normal life Catherine had and the living hell that it became. When I read it, I had no idea of the outcome and because of that, whilst there is a sense of foreboding (we all know not to put radium in our mouths so reading those early sections one felt like shouting out the danger), the depth of the damage done was shocking. All the way through the later chapters I had a sense of anger and sadness at the life lost, the life Catherine could have, should have, had.
The early chapters show vividly the kind of life lived by young people in the prohibition era and I especially loved the little scene outside the pharmacy in which one of Catherine's friends managed to procure a little illicit alcohol. The sense of carefree lives, full of hope and expectation, and of shy romantic encounters were all beautifully done, which only added to the poignancy of the later chapters.
The physical deterioration is portrayed unflinchingly but, as it comes from Catherine's point of view it is not a grim spectacle, because we are not merely gawping, we are discovering what it must have felt like to suffer these horrific symptoms. Catherine has to remind herself, and the reader, that she was still a very young woman.
It is clear that the author has researched every tiny detail of this tragic episode of history, not only with the court papers but even detailing the occasion when the court hearing had to move location to accommodate the physical limitations of the victim.
The use of quotations, either from the victims, the deniers, or the court judgements, at the beginning of each chapter was a good device, serving as a potent reminder that this was real, that it happened, and what a scandal it was.
The entire novel is told from Catherine's point of view and I might have preferred to read parts of it from someone else's, and would have welcomed a little more characterisation of the other girls, to get a better sense of their different personalities as well as the challenges they faced. It's clear that there was a lot of local opposition initially to the legal action from those whose incomes depended on the radium company and perhaps a little more detail of that might have added another layer to the story.
Overall though, a brave and accomplished piece of fiction. I can't say it's an enjoyable read, because of the subject matter, but it is a book that should be read and one which achieves its aim of deeply humanising the story.
[A note on the review copy we received: We're not sure whether the version reviewed was a pre-publish ARC edition or not. In the review copy there were a number of typos and homophones (which of course spell-checker will not pick up. Cautionary tale!) but the author has been informed and has taken steps to ensure any errors are amended.]
Reviewed for Discovering Diamonds