To Be A Queen by Annie Whitehead 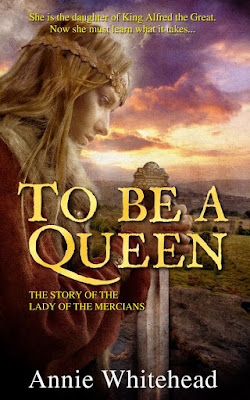 shortlisted for Book of the Month~ Good Read Revisited
Amazon UKAmazon USAmazon CAAmazon AUGoodreads
Fictional Biography
9th /19th Century
Anglo-Saxon England
"One family, two kingdoms, one common enemy ...This is the true story of Aethelflaed, the ‘Lady of the Mercians’, daughter of Alfred the Great. She was the only female leader of an Anglo-Saxon kingdom. Born into the royal house of Wessex at the height of the Viking wars, she is sent to her aunt in Mercia as a foster-child, only to return home when the Vikings overrun Mercia. In Wessex, she witnesses another Viking attack and this compounds her fear of the enemy. She falls in love with a Mercian lord but is heartbroken to be given as bride to the ruler of Mercia to seal the alliance between the two Anglo-Saxon kingdoms. She must learn to subjugate her feelings for her first love, overcome her indifference to her husband and win the hearts of the Mercians who despise her as a foreigner and twice make an attempt on her life. When her husband falls ill and is incapacitated, she has to learn to rule and lead an army in his stead. Eventually she must fight to save her adopted Mercia from the Vikings and, ultimately, her own brother."
When I was asked to review this wonderful novel for Discovering Diamonds I had no hesitation in saying ‘yes’. I had read it a good while ago when it was first published, but I was, this time around, awed by the new, stunning, cover (designed by Avalon Graphics) and was every bit as delighted with the pleasure of reading the text again. If anything, second time around was even better.
We have all (if you are interested in England’s history) heard of Alfred the Great – but what of his children, particularly, his daughter who became The Lady of Mercia? Set between AD 874 and AD 918, the research about the period, and of Æthelflæd's life, is impeccable, all the characters are believable and the writing, beautiful. Ms Whitehead handles the politics, the personal feelings, the warfare, all with equal skill.
It is, I admit, difficult to get the mind (and tongue) around some of the unfamiliar Anglo-Saxon names, but I handled it by mentally giving the characters nicknames (helped by the fact that Æthelflæd herself was known as Teasel.) The narrative, however, is so evocative you can easily skim over the little stumbles of pronunciation.
What is so enthralling about this novel is the dexterity of the author's ability to blend the facts (the few known) with the imagined or plain ‘made-up’. This is how historical fiction should be written, how history should be told – as well-crafted, superb storytelling. Brava Ms Whitehead! A Diamond read indeed.
Reviewed for Discovering Diamonds
© Anne Holt