A Thank you To Sharon K. Penman


A Thank You to Sharon K. Penman
by Annie Whitehead


I was introduced to Sharon Penman's writing in a general recommendation from my sister, when I first moved to Cumbria and was living in a cottage by myself. In the days before mobile phones, Sky TV and the internet, books were not just a pleasure, they were an essential!

Two of Penman's books were on the list, and a random choice found me picking The Sunne in Splendour to read first. This book was first published in 1982, although my copy dates from 1986, the year of my move.

Despite having studied history at 'A' Level and then for my degree, the only time I had been taught anything about the Wars of the Roses was as an introduction to the Tudors, in order to give some contextual perspective to the syllabus. This book was a revelation. I was taken into another world - inhabited by people I thought I knew: Edward IV, Warwick the Kingmaker, Cecily Neville, and Richard of Gloucester himself. It was lush, and it was massive. What a brick of a book - 882 pages in paperback - and I was to keep the company of these people for a long time.

Some of my preconceptions were confirmed, and some were challenged. Although my views on Richard III remain ambivalent, Penman drew a real and believable portrait of a man who must have occupied one of the most tricky positions in royal history.

Next on the list came Here Be Dragons, the first in her Welsh Trilogy. I knew nothing about this period, or indeed the area. The landscape, literal and metaphorical, was foreign to me. Again I was drawn into a different world, this time that of Llewelyn ap Iorwerth and his English bride, Joanna, natural daughter of King John. I learned so much, about Welsh history, about this formidable woman, and Penman brilliantly placed her in a quandary: how does one reconcile one's feelings for one's father, when as a king he acts less than honourably?

The second volume in the trilogy takes us back into England, and Falls the Shadow focuses on the life of Simon de Montfort and his wife, the king's sister. Again, family loyalties lie at the heart of the drama as they are put under an almost intolerable strain. The history is vivid, the battle scenes horrific, the love scenes tender. So well-written is the character of Simon, that years later, visiting the site of the battle of Evesham, I found tears pricking my eyes.

The final volume, The Reckoning, takes us back to Wales. Here, Llewelyn's grandson, also Llewelyn, agrees to marry the de Montforts' daughter, Ellen. By all accounts, this became a marriage of true love, but it was hard won. The enemy here is Edward I, and he kept the couple apart for many years. Llewelyn is not simply battling Edward's determination to stamp his authority on Wales, he is also fighting his own siblings. One scene, involving Ellen at the palace at Abergwyngregyn, had me sobbing. To know that this is all based on real events only adds to the poignancy.

By coincidence, shortly after I'd finished this series, we had a family holiday in North Wales. It was a 'pin in a map' decision - a guest house that could provide a family room for two adults and three children, plus a double room for my parents - and that booking found us driving through all the places mentioned in these novels. My love affair with the area had begun, and has never ended. So much so that I visit, on average, twice a year, and have even learned to speak the language (badly.)

I next read When Christ and His Saints Slept. The title is taken from a quote referring to the civil war between Stephen and Matilda (called Maude in the novel.) Again, it is the perfect blend of history, and dramatisation. Time and again, I found myself marvelling at Maude's fortitude, only to read afterwards that all the incidents were based on true events. Penman does not falsely empower her medieval women; she describes them, tells the stories of their lives, while keeping them firmly in their historical context. And they are more powerful because of it. The male characters are by turns heroic, and humanly flawed.

Nowhere, perhaps, is this more true of her writing than in her next book, about Eleanor of Aquitaine and Henry II. Again, this is a period about which I am less familiar, never having studied it officially. Amazon says that Time and Chance is the second of her Eleanor Trilogy, When Christ and His Saints Slept being the first, although I read the former as a stand-alone novel. Here we get to know Eleanor, but in this volume the focus is on her husband Henry's dealings with Thomas Becket. To have this episode played out between two men, once friends, with conflicting ambitions and points of view, rather than simply two names from the history books, brought depth and detail to one of the most famous arguments in history. 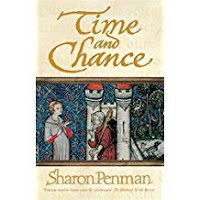 I confess, because of a gap in publication, I did not read the last of the trilogy, The Devil's Brood, (although she wrote two more novels after this, expanding the trilogy to tell the story of Lionheart) nor have I read her Justin de Quincy Mysteries, which feature fictional characters. I can't imagine that they are any less brilliantly conceived and delivered, though.

Reading the novels of Sharon Penman had a profound and lasting effect on me. It increased my knowledge of medieval periods scarcely taught at schools and universities. It brought me closer to the people who made that history, by introducing them to me as real people, rooted firmly in their own time, but nevertheless experiencing universal emotions. And it nourished a desire, burgeoning since my undergraduate days, to do the same service to the characters who populated the British Isles before 1066. In a word, and for all these reasons, Sharon Penman's novels are inspiring.

Sharon Penman is of Anglo-Irish  heritage and lives in America. She has degrees in history and in law and was a practising lawyer until the publication of The Sunne in Splendour, her first novel.
Find her Amazon author page HERE