we are a little different this year:
some contributions are exclusive stories, others are excerpts
from the authors' novels,
but all have our traditional format of...
Read the Story - Guess the Song
Here's a clue to the song title
“Shiiiiiit!”
The panic-stricken shout from inside the wheelhouse was followed by the cough of the ignition being turned over time and again. The starter didn’t catch. The wheelhouse door was ripped open. “The bastard’s going to run us down,” Sam cried into the dark cockpit.
Jonathan pushed Naunet away and jumped up, almost crumpling into the well. His left leg had fallen asleep as he had held Naunet, comforting her, assuring her everything would turn out all right. “Get on the horn!” 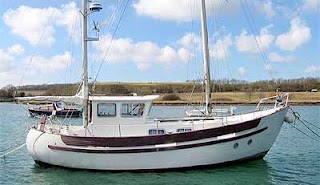 Sam had already flipped the switch of the shortwave. He grasped the mike and pressed the ‘transmit’ button so hard he was afraid he would embed it into the surrounding plastic.
“Sécurité, sécurité, sécurité,” the youth cried into the mike as if the higher volume of his voice would make a difference. “This is the sailing vessel Esperanza.” He shakily gave their coordinates and heading. “Large ship bearing down on us, please alter course to west-northwest. We are unable to move out of your way.” He depressed the button. Jonathan and he held their breath for an answer hoping the other guy on watch wasn’t dozing.
Panic transmits itself quickly throughout the confines of a small boat. By now everyone crowded into the wheelhouse. The other five did not dare to say anything as they waited for a reply to Sam’s urgent transmission, imagining what would happen if it did not come. Too many large ships never knew they had run down a sailboat. Not until, by daylight or in the next port, they found tattered rigging dangling from one of their bow anchors. In his mind, Jonathan ticked off the steps required to release their lifeboat canister strapped down on deck in front of the main mast. Oh God, he prayed, let the damn thing cross in front of us just this one time.
“Sailing vessel Esperanza,” a pleasant, nonchalantly professional voice boomed back at them. “We have you on radar. Passing to your starboard now.”
Suddenly, the slapping of their luffing mainsail, deprived of its breeze, was eclipsed by an overwhelming rhythmic pulsing. Jonathan engaged the autopilot. It would hold the Esperanza steadier than any human could; especially since her humans did not feel steady at all. Despite the terror in their hearts, they rushed outside. 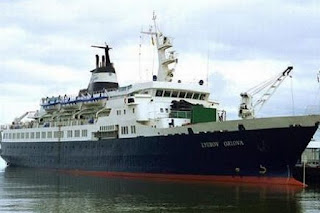 “Shiiiiiit!” Sam hollered again as he gawked up at a wall of steel towering above them, obliterating the moon. Its passage seemed to last forever. There was only the faintest of light coming from the high bridge.
Jonathan suddenly remembered that the ship had not identified herself during her last transmission. On top of it, not running any navigation lights at night was a definite no-no in any sailor’s book. “Bastard,” he breathed, and then remembered they themselves were running dark. As the moon re-emerged, he knew they would now be bounced around from the propeller wash.
“Hold on!” he shouted.
The radio in the wheelhouse crackled to life again. “God speed, sailors,” the voice said and then added, “Sorry about the wake.”
“Bastard,” Bill echoed Jonathan’s sentiment.
Naunet had fled into the wheelhouse as if she could get away from the looming behemoth in there. She had stood mesmerized by the black wall of steel rumbling past them. It had passed them so close she could make out the patchwork of rust covering the hull.
After the ship was gone, Jonathan stuck his head into the steering station. His voice shook, “This was too damn close for comfort.” He observed Sam’s fallen face and knew the youth blamed himself for letting things get out of hand. Despite wanting to swat the youngster behind the ears, he thought better of it and instead assured him, “Well done, Sam. You sure saved our asses. That thing came up way too fast. There was no way you could have judged her speed.” The little lie was worth the brightening of the young sailor’s face. For good measure, Jonathan slapped him on the back—and in his heart thanked the mystical sea goddess, for whom his wife had been named, for her clemency in case she was the one looking out for them. One day, he promised himself he would throw a meaningful piece into her waves; to him, the greatest sacrifice would be a spare part for the engine—a sort of sacrifice to the powers of a goddess. Naunet would understand.
After they left a nervous Bill to take the next watch, the others went below to sleep. Whether it would come to them was doubtful. As they bedded down in their tiny cabin, Jonathan took Naunet into his arms again. How could she trust him to keep her safe after such a near-disaster? He got his answer when she snuggled into him. Hoping he was still her hero, he asked, “All better now?”
“All better now,” she whispered back. “Indeed, all better now.” Then she leaned on one elbow and asked, “What was that thing?”
“A ghost ship in the night. Uuuuh.” Jonathan made silly noises and nuzzled her neck until Naunet giggled, “Stop it.”
“You want me to stop, Madame? When I was just beginning?” He stilled her giggles with ever-more fervent kisses.
They made love, not caring that sound had a way of traveling through a boat like an aggravating arrow burying itself into the heart of those who had no one to hold. 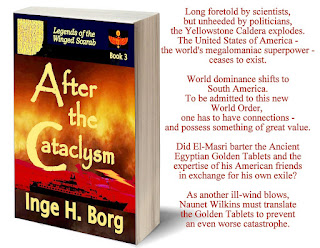 Excerpt from After the Cataclysm, Book 3,
Legends of the Winged Scarab 5-Book Series
Song:  “Helmsman, Leave Your Watch”
from the Opera 'The Flying Dutchman'
by: Richard Wagner 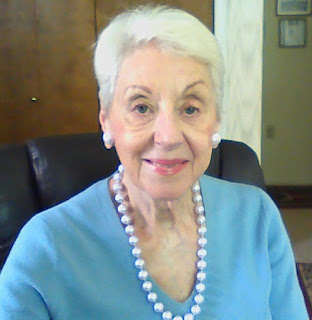 Inge H. Borg was born and raised in Austria in a veritable Heidi-setting.
At 18, she left for London to study English, then Paris, and Moscow (French Embassy). In 1964, she got a super job at the Innsbruck Olympic Winter Games. Back in Vienna working for an international company, she was transferred to their Chicago Sales Office – for one year. She never went back.
After many interesting jobs in historic Boston, cold New Hampshire, and sunny (sailing) San Diego, she retired to a beautiful lake community in Arkansas. There, she finished her first saga set in Ancient Egypt, and subsequently wrote another four novels of the Legends of the Winged Scarab series.
She also penned several small volumes in a lighter vein – but vehemently denies any of those satirical misadventures of the notion called love are autobiographical; except for “Pasha,” her favorite rescue cat.
Books Available for Kindle and in Print at:
Amazon-US
Amazon-UK
Check out Inge’s “Fact in Fiction” series on her Blog:
http://devilwinds.blogspot.com/
images via: the author unless otherwise stated
Note: it is illegal to copy lyrics but there is no © for ideas!
< Previous Story ... Next >
our stories or excerpts to enjoy
DECEMBER
1st Deborah Swift -  an excerpt from Pleasing Mr Pepys
2nd Graham Brack - The Clock Struck One
3rd Cindy Vallar - Rumble the Dragon
4th Barbara Gaskell Denvil - The Great Forest
5th Nicky Galliers - Two Stories
6th Annie Whitehead - excerpt from To Be A Queen
7th Judith Arnopp - an excerpt from The Winchester Goose
8th Paul Marriner - First Love
9th Loretta Livingstone - Labour of Love
10th Marian L. Thorpe - excerpt from Empire’s Heir
11th J G Harlond - excerpt from A Turning Wind
12th Amy Maroney - excerpt from Island of Gold
13th Richard Tearle - excerpt from the North Finchley Writer's Group
14th Inge H Borg - Excerpt from After the Cataclysm
15th Juhi Ray - the movie Jodha Akbar
16th Clare Flynn - Excerpt from The Green Ribbons
17th Anna Belfrage - A Light So Bright
18th Elizabeth St John - excerpt from Written in Their Stars
19th Nicky Galliers - Duty
20th Erica Lainé - La Belle Russe
21st Anna Belfrage  - Excerpt from A Rip In The Veil
22nd Kathryn Gauci - Excerpt from The Poseidon Network
23rd Cryssa Bazos - Excerpt from Rebel's Knot
24th Debbie Young -  The Secret Ministry Of Frost
* * *