Today's Tale is a bit of a treasure hunt in a dusty old loft...
Illicit Familial Diamonds!
by
Nancy Jardine 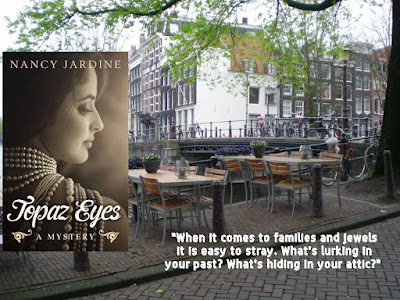 Topaz Eyes is a mystery treasure hunt for a fabulous jewel collection that was once Mughal owned. Though essentially named an emerald collection, diamonds of all sizes feature very highly throughout the novel... here's a taster...

Investigating the loft took hours. Piled boxes joined others as they painstakingly opened and closed the next one. Keira worked her way through a large crate which must have belonged to John. It was filled with family board games, jigsaws, painting equipment and old tin boxes. Inside the tins, John had stored worn and dented, miniature metal cars, and trains from a long-gone train set.
“Did you have a car collection, too?” Her sudden question shattered the silence as she held one of them up for him to see.
Teun came over to the corner she worked in, his laughter a delighted sound she was glad to hear again. “Yeah! I traded with him when we were little squirts. What else have you got there?”
They took turns to excavate the huge carton, Teun chuckling away as he unearthed something memorable. Keira pulled out yet another old cookie tin. She prized open the tight lid and shrieked.
“Teun!”
Inside the tin were two long velvet cases.
“You open them!”
His smile was puzzled since she’d been quite happy to do all the investigating before, without any reference to him.
“What is it?”
His words faded as he opened the first – a dark crimson velvet box, the plush so stained with dampness it almost looked white. Most of the loft contents were still in good condition, but this looked to be one of the oldest items they’d uncovered so far.
Keira’s legs trembled. A cool shiver coursed down her spine, the anticipation making the unveiling seem almost creepy.
His voice was a broken hush. “Is this what I think it is?”
“Good God! Look at that!”
Four strands, made from tiny green stones, joined the most exquisite centrepiece clasp of diamonds, the whole necklace gleaming on the faded cream silk interior. At each end of the box lay two different earrings. All the earrings were pear-shaped; one set made from small sparkling bezel-set diamonds, and the other vibrantly coloured. In place of diamonds, the second pair of earrings was enamelled in red, green and blue on a white background. Teun almost dropped the box as he passed it over for her to have a better look, his arm trembling. 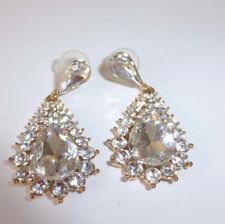 “Oh… shit! I can’t believe it!”
Keira was in shock. It was the most intriguing jewellery she’d ever seen, but she was mystified by the extra coloured set of earrings. Although totally gorgeous in themselves, they didn’t match the floral cluster of sparkling diamonds. Tentatively lifting the necklace, she realised the significance of two sets of earrings. The whole necklace was double-sided. It could be worn showing a deep centre clasp which was a sunburst of small diamonds, with two additional rows of tiny diamonds set below – and in the ultimate central position was a teardrop pendant of three layers of tiny diamonds. If the necklace was worn in reverse, there lay a masterpiece of red, green, blue and white enamelling.
“This is so amazing! And it looks Indian.” Her throat was raspy, her words the tiniest whisper.
They dragged themselves back to the chest and fumbled their way back down onto it, the velvet case in front of them, neither capable of speaking.
She caught Teun’s glance. His swallow had been so awkward, a metaphorical boulder lodged in his gullet. Awe. Amazement. Shock. Trepidation. They were all there in his eyes as words eventually seeped out.
“I didn’t expect this, Keira. How could my grandmother have hidden these away like this?”
She wasn’t sure an answer was needed, but she gave one anyway. “Marijke must have had her reasons for keeping them secret, Teun.”
“Secrets? Damn right she had secrets!”
He slowly placed the box down on the floor, and then whipped back up again. His lips on hers were a surprise, his grasp of her shoulders not so light. The kiss lingered and deepened before she realised it wasn’t a kiss of exultation, or even happiness. Breaking away from him, she forced eye contact.
“What are you not saying here, Teun?”
“You have no idea how this family sometimes struggled for money. Grandfather died before John and his brothers were born, and Uncle Adam was sometimes out of work. My father sent money to Aunt Marta to keep them afloat, since she also looked after my grandmother.”
Teun got up and paced between the cartons and furniture scattered nearby, his hand rifling through his short hair.
“Don’t mistake me. Uncle Adam was never work-shy. He worked in the construction industry, so employment was erratic. Mostly he had contracts, but there were often lulls between those contracts when he had no pay. That’s when Dad would help them.”
“Do you think maybe, by then, your grandmother had forgotten about the diamonds?” It sounded a bit of a stretch, but his agitation was so great she wanted to soothe him.
“Never. Grandma was sharp as a tack! She forgot nothing.”
“Then there must have been another reason.”
He grasped her hand and dragged her back to the carton holding John’s things. “You open it this time!” 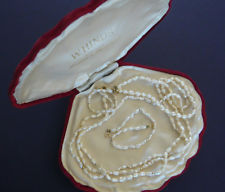 The second box was a similar shape. As she prised open the lid, a loose white bead leapt out and skittered across the wooden floor. She let the stiff lid close again before placing it carefully on the floor. Down on her knees, she opened the box a second time. Very slowly.
Inside was a pile of white, round balls. Not plastic beads as she had first thought when the first had popped out, but pearls. Three strands of thin, hairy thread were strung with a few of the pearls, the rest lying loose. As in the previous necklace, it looked as if the clasp was intended to be worn at the throat, and not at the nape, for it was a work of art in itself. In the centre of the pear-shaped design was a sizable emerald and around it sat rows of tiny diamonds, all set in what looked to be heavy gold. The scrollwork of the clasp alone was enthralling.
“Bloody hell! Would you look at that?” Keira’s voice was barely a whisper through the tears freely flowing from her astonished eyes.
Sliding to the loft floor, her knees were unable to support her as she scrabbled for the pearl that had rolled away. Teun dropped down alongside her, trailing his fingertips through the ripple of pearls. “Not only a diamond studded necklace, but this as well?” 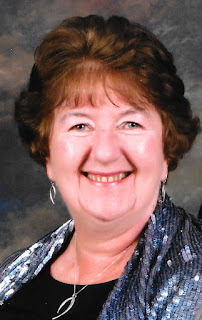 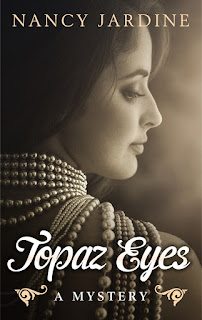 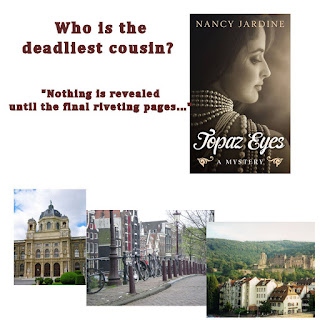