England is at war - with itself, Parliament against the Crown, Protestant against Catholic. Charles I desperately needs money to fund his cause - and only his wife, the Queen, can help...

The Stolen Diamonds
Queen Henrietta and the Three Brethren
by
Elizabeth St.John

An excerpt from “By Love Divided” with a new scene describing the “traitorous actions” of Queen Henrietta and her Lady in Waiting, Anne Villiers.

The queen was by the parliament voted traitor for many actions, as pawning the crown-jewels in Holland, encouraging the rebellion in Ireland, heading a papistical army in England.

Allen paced the hall at Bedford House, his footsteps creaking on the warped floorboards. Dear God, this place was positively ancient. Not exactly Richmond or Whitehall. Jesu, would those spaniels travel too? And his aunt? He did not relish seeing her again after her last outburst.
He paused to once again straighten the moth-eaten embroidered carpet covering the ancient oak table. If the queen enjoyed her stay, it would be helpful to his next position. After all, if the war was concluding, the king would need plenty of good men to advise him when he returned the court to Whitehall.
A soldier shoved open the door and saluted Allen. “They are at the gatehouse, sir.”
“Thank you.” Allen strode to the steps as two carriages and a dozen armed outriders drove across the green. Interesting. The queen traveled swiftly, no train of followers to slow her down.
The second carriage drew up before Allen, and he swept a deep bow. A pair of crimson French leather riding boots descended the step.
“Your Majesty,” he said. “I bid you welcome to Exeter.”
“Inside, and quickly, Sir Allen,” replied a brisk voice. “We do not stand on ceremony today.”
Allen straightened and took a pace back. Those eyes, particularly beautiful, luminous, haunting.
“Madam . . . Lady Dalkeith . . . Anne . . .”

His cousin looked beyond him and surveyed the façade of the house, pulling a face. “My mother stays with the court in Oxford. The king thought it best that I escort the queen. My mother is still not well.”

She lifted her hand, and he brushed it with a kiss.
“And now, we must bring the queen inside. I hope you have arranged a comfortable chamber for her.” Her face expressed doubt.
Anne turned and opened the carriage door wider. The queen slowly emerged, clinging to Anne’s hands, tentatively putting a foot on the step. She was as Allen remembered her from Oxford, yet frailer, smaller. And dressed in a loose gown with a fur around her, even on this beautiful spring day. As she alighted, the coat fell open. Queen Henrietta was heavily pregnant.
Allen’s eyes met Anne’s. She nodded slightly. This was not the visit he’d expected. Once again, the Villiers were impacting his life.
“We were to stay in Bath, but the Earl of Essex leads the Parliamentarian advance toward the west. We are safer here in Exeter until after the child is born.” Anne was much like her mother. Not one to mince words. “I shall need a woman to help,” she said over her shoulder as she assisted the queen through the open door. “A local girl, one who is well connected and versed in child rearing. And fresh milk, honey, soft white bread. Good wines. And is there no fire? We must have fires lit; the queen feels the cold most desperately.”
Jesu, did this woman not know there was a war raging around them? And that Exeter’s merchants were still for Parliament? Where the hell was he going to obtain white bread and fine wine?

Anne helped the queen into the large bed, pulling aside its musty hangings and smoothing the damp covers. Under her grip, the queen’s thin arm trembled. Anne quickly enfolded her mistress in the beaver skin fur, the dark cloak swamping her small frame until just her pale face glowed in the shadows.
Jesu, this life of running brought discomfort at every turn. And the queen’s advanced pregnancy added an additional burden. God knows what would happen if she died in childbirth. The king would be a broken man without her. And the cause would be lost.
“We are safe here?” Queen Henrietta’s husky voice broke through her thoughts. “Lady Dalkeith, you are sure of the loyalty of your cousin?”
Anne nodded. “Sir Allen was one of my brother’s closest friends. He will guard you well, your Majesty.”
The queen sank back into the pillows, her eyelashes dark on her pale cheeks. “My baby will be born here. And then I leave for France.”
Tucking the fur closer around her small frame, Anne curtsied. “We shall travel after you are churched.”
“I will not wait forty days,” replied the queen. “There is no time for ceremony. We are at war. I must return to France and raise more funds.”
So, this is how it was. Even this Catholic queen would sacrifice her soul for her husband’s safety.
“Majesty, it will be difficult to travel with such a small child.”
“I leave her with you.”
The room darkened around Anne as the queen’s words sank in.
“You would leave your newborn babe behind, while you travel to trade with the Flemish bankers?”
“It is a choice no woman should have to make. But my mind is clear. The creature will only slow my journey. It will be safer here with you, Lady Dalkeith.”
The queen gestured to Anne to come closer to her. In the dark chamber, her eyes glowed with a fierceness of spirit that belied her fragile body.
“Bring me the petite chest, with the mother of pearl inlay. The one that lays hidden within our clothes press.”
Anne turned to the trunk that had been brought to their room by Allen’s guards. She opened the iron-banded curved lid and carefully put aside the crimson silk dress and petticoats that lay within. Her hands touched the smooth surface of a small box. Pulling it from beneath the court gowns, she placed it on the fur next to the queen. Taking a taper from the fireside, Anne lit several candles around the bed, and in the golden light that filled the chamber, the queen’s expression was fey, otherworldly.
Queen Henrietta pulled a small key on a ribbon from her bodice, and unlocked the chest. Raising the lid, she looked up at Anne, a small smile curling her lips.
“Come, Anne, come and see what else I carry. A child may travel within me...but the fate of my husband accompanies us too.”
She dipped her hands into the velvet-lined chest and pulled forth a jewel such as Anne had never seen in her life. Flattening her palms to cradle the object, Queen Henrietta tilted the piece this way and that to catch the flickering candlelight.
Anne gasped. A huge diamond, curiously cut in the form of a pyramid, lay at the center of an intricately worked pendant. Surrounding it were three enormous square-cut rose-colored balas rubies, and between them lay three black pearls, gleaming in the golden light. More diamonds surrounded the central pyramid.
“The Three Brethren,” said the queen triumphantly. “They have been with me for the past two years. The first time I went to raise foreign funds, the moneylenders would not touch them.” She stroked the jewel, possessively. “Now I have a Flemish merchant ready to buy it.”
“But is this not Queen Elizabeth’s jewel?” asked Anne. “I recall the painting in White Hall where she wears it. They say it was one of her favorite pieces. And surely this belongs to the royal collection.”
Queen Henrietta shrugged.
“Maybe so. But now it is mine. And I choose to save my husband’s life by selling it.” She placed the jewel back in the box and slammed shut the lid. “Our army needs resources, supplies, weapons. And I am in the best position to raise funds. I can travel to the Flemish money lenders while my husband stays to fight.”
“And you leave after your baby is born?”
“As soon as I can ride.” The queen looked up at Anne sharply. “Do you question my decision?”
Anne shook her head. There was no right answer here.
“Good. You will care for my newborn, and make sure the child is christened and then taken to safety.” She locked the case and stuffed the key back inside her gown. “I will take her Three Brothers and save her father’s life.”
Laughing at her own joke, Queen Henrietta lay back on the bolster. Anne watched as her eyes gradually closed and her breathing became steady.
But for her, there was no sleep. In this time of war, she alone was responsible for the king’s youngest child. And in these uncertain times, who knew if either of them would live or die.

Note:
After arriving in Exeter, where Sir Allen Apsley was Governor, Queen Henrietta Maria gave birth to a daughter, Henriette on the 16th of June, 1644. Less than a month later, she left for Paris, leaving her newborn daughter in the care of Allen’s cousin. Anne Villiers, Lady Dalkeith, The queen took with her jewels and other precious items to sell, including the famed “Three Brethren”. The jewel, which is shown in the Ermine Portrait of Queen Elizabeth, was described as containing “pyramidal diamond; 3 balas rubies; 4 pearls with the addition of a table cut diamond of 30 carats and two pointed diamonds. The Queen was able to raise 104,000 guilders on the sale of the jewel, which was considerably less than its value.
The jewel was subsequently lost or broken apart, and its whereabouts became unknown. The queen never saw her husband again; her daughter, Henriette, was eventually smuggled to France by Anne Villers to be reunited with her mother and brothers in the exiled court.
© Elizabeth St John 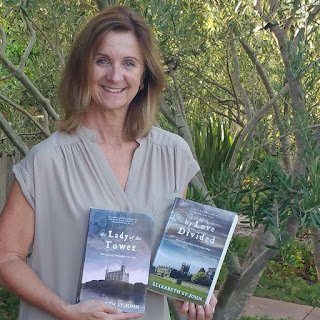 About Elizabeth and The Lady in the Tower

Elizabeth St.John was brought up in England and lives in California. To inform her writing, she has tracked down family papers and residences from Nottingham Castle, Lydiard Park, and Castle Fonmon to the Tower of London. Although the family sold a few castles and country homes along the way (it's hard to keep a good castle going these days), Elizabeth's family still occupy them - in the form of portraits, memoirs, and gardens that carry their imprint. And the occasional ghost. But that's a different story...

By Love Divided, Elizabeth's sequel to her debut best-seller, The Lady of the Tower, continues the family saga and follows the fortunes of the St.John family during the English Civil War. 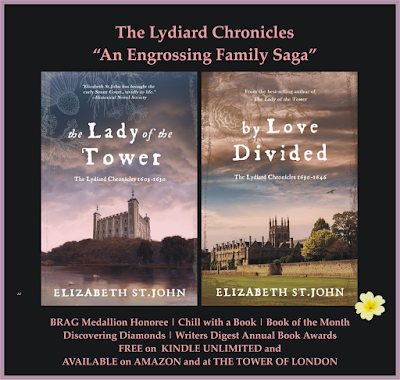