The Silkworm Keeper by Deborah Swift 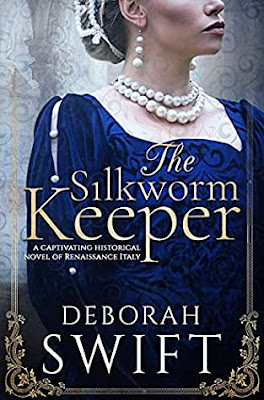 Fictional Drama
17th century
Italy
"Rome 1638 Old sins have long shadows ~ Italian Proverb
Giulia Tofana never wanted to be a nun, but she is determined to atone for her past misdeeds by making her new monastery a success. When an unexpected disaster closes the convent, Giulia is forced to turn to her old friend Fabio Pasello for help. Giulia still has intense feelings for Fabio and Fabio’s passion for her has never diminished.
But they are not the same people they were before. Giulia has taken her vows, and Fabio is apprenticed to Gianlorenzo Bernini the famous sculptor, and has become one of Bernini’s rakish libertines. They could not be further apart.
To add to their problems, Giulia cannot escape her reputation as a poisoner, and is soon embroiled in a plot against Fabio’s patron, Pope Urban VIII. Faced with the idea of murder, will Giulia renounce her vows or embrace them?"
Inspired by true stories, this is a novel of nuns and courtesans, artists and priests, in the shadow and splendour of the Eternal City.
This is the second in a series and I've already read the first (The Poison Keeper). I feel this can be read as a standalone, but I'd recommend reading these books in order, to get a better sense of how Giulia's and Fabio's relationship has developed and changed over the years. That said, Ms Swift provides enough background information without ever allowing the exposition to slow down the narrative. So here we find Giulia in her new life as a nun, but if she thought to settle quietly into the religious life, she was wrong. Sent to establish a new nunnery, she is horrified by what she finds there. I found this part of the book compelling, and the desperate straits in which the new novices find themselves elicit nothing but sympathy. The author makes it clear, without labouring the point, that life in such times was hard for women unless they were of independent means.
When Giulia and the nuns are forced to leave the barely-established new convent, they try to start a new life in Rome. Just as she did with the first book, set largely in Naples, Ms Swift gives the reader an immersive tour of the city, bringing it to life with all the sounds, smells and sights, and showing all levels of human life. Fabio has already experienced how the rich control the lives of those dependent upon their favour, and how, when the law is transgressed, money buys the perpetrator out of trouble and the 'little' people are offered up as scapegoats. The constant fight to dictate their own lives is a powerful motivator for Fabio, Giulia and the novices. This, coupled with the desire to escape the past, also hampers the relationship between the two main characters and their deep feelings for one another vie with the determination to move on and make new lives for themselves. It was deeply touching to be witness to their struggles.
This is not just a character-driven story, however. The plot is deceptive and clever. As the characters grab the reader's hand and rush them through the streets of Rome to the dramatic concluding scenes, much falls into place. A simple scene early on which, I thought, was written to demonstrate nothing more than that one rich, louche, character was not to be trusted, turned out to be crucial when Fabio and Giulia find themselves entangled with the plot against the pope. The final scenes leave the reader wondering, "How are they going to resolve this?" and the beauty of the clever plotting is that even the characters aren't sure. I think I was actually holding my breath at one point... I'll say no more, for fear of spoilers.
Once again, Ms Swift gives us an ending which, though offering the promise of a further volume, is not a cliff-hanger. All in all, an involving, satisfying read, beautifully researched and skillfully executed.
Reviewed for Discovering Diamonds