The King’s Spy, by Mark Turnbull 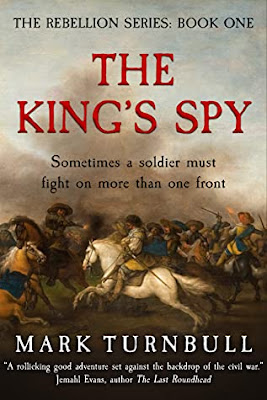 Fictional drama/ military /novella
17th century /English Civil War
England
The King’s Spy is crammed full of action, flesh and blood characters, and a fantastic history. That the author did this all within the form of a novella is nothing short of outstanding. I have a great deal of admiration for how the author did so much within so few pages. This is a testament to Mark Turnbull’s precise use of the language.
Captain Maxwell Walker is a royalist cavalry officer in the heat of fire at the Battle of Naseby. The descriptions of the battle are vivid, but not gratuitous, and Mark Turnbull does an admirable job of bringing the fear, the stench of gunpowder and the unique details of 17th-century warfare to the forefront. During the battle, Maxwell sees an enemy soldier on the field, a man who he recognized as having killed his wife, but he loses him during the rout.
After the battle, Maxwell’s commander picks him for an urgent mission to retrieve the king’s belongings that are being stashed at a nearby royalist home. Unfortunately, by the time he reaches the manor, he discovers that a rival royalist commander has also sent his man on the same mission. That little detail captures so perfectly the cutthroat manoeuvring amongst the king’s commanders in order to gain his favour without having to resort to just telling the reader that things were political. With two royalists vying to be the one who brings back the king’s belongings, matters become further complicated when the Parliamentarians turn up to the manor and overrun the place. Maxwell is forced to take desperate measures to ensure the Parliamentarians don’t find the king’s possessions, even if it makes him look like a betrayer and places his life at risk. And then throw in the enemy Parliamentarian upon whom Maxwell has vowed to get his vengeance, and it makes for a page-turning and gripping read.
The writing is excellent. The author weaves details of Maxwell’s past without slowing down the narrative and evokes powerful emotions honestly and without melodrama. Overall, the novel balances action and suspense, without giving up those tender moments that will stay with a reader long after the book is finished. One passage is an excellent example of how the right historical details can evoke a feeling of love and loss.
"But right now, the woodsmoke took him back to that last evening with Catherine, when he had thrown her coif covering to the corner of the bedroom and then playfully tangled his finger around her blond curls. As he had kissed her lips, the entire room—nay the house itself—had fallen away and they had been at one with each other."
There was certainly more than enough meat in this story to warrant expanding into a full-length novel, and yet, I never once felt cheated or left with the impression that the story was rushed or wanting. The ending has a clever little twist, which nicely sets up the series without it being a cliffhanger.
The King’s Spy has something for everyone: well-executed military history, a main character who we can cheer for, and all the detailed nuance one would expect in finely crafted historical fiction. I will be eagerly looking forward to the next book in the series.
Reviewed for Discovering Diamonds