The Castilian Pomegranate by Anna Belfrage 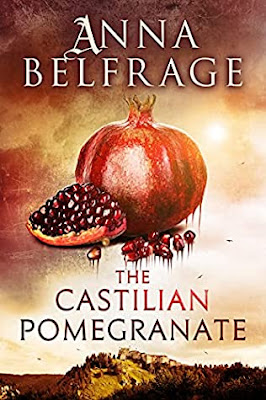 "An enraged and grieving queen commands them to retrieve her exquisite jewel and abandon their foundling brat overseas—or never return. Robert FitzStephan and his wife, Noor, have been temporarily exiled. Officially, they are to travel to the courts of Aragon and Castile as emissaries of Queen Eleanor of England. Unofficially, the queen demands two things: that they abandon Lionel, their foster son, in foreign lands and that they bring back a precious jewel – the Castilian Pomegranate.
Noor would rather chop off a foot than leave Lionel in a foreign land—especially as he’s been entrusted to her by his dead father, the last true prince of Wales. And as to the jewel, stealing it would mean immediate execution. . .
Spain in 1285 is a complicated place. France has launched a crusade against Aragon and soon enough Robert is embroiled in the conflict, standing side by side with their Aragonese hosts.
Once in Castile, it is the fearsome Moors that must be fought, with Robert facing weeks separated from his young wife, a wife who is enthralled by the Castilian court—and a particular Castilian gallant.
Jealousy, betrayal and a thirst for revenge plunge Noor and Robert into life-threatening danger.
Will they emerge unscathed or will savage but beautiful Castile leave them permanently scarred and damaged?"
When the sun is shining and you check your 'to do' list for the day and see that you have a new book by Anna Belfrage to read and review, it is very much not a chore to sit in the garden and read all day. Which is exactly what I did a few weeks ago when the last of the summer sun threw its warmth at me and Ms Belfrage scooped me away to medieval Spain. And I really did feel as though I was there, with delicious descriptions of flower blossom, and the sights and smells of the Spanish countryside, the bustle of Barcelona and lush depictions of interiors of palaces and chapels. There is so much rich detail that you really feel you are there alongside Robert, Noor, and their frankly rather motley crew of companions.
I've read the first in this series (His Castilian Hawk) and I advise you do the same. Not because you need to in order to catch up with the story, but just because it's a really good read. In this new book, Ms Belfrage gives sufficient background information that you can read this as a standalone.
And so we know why Noor and Robert have found themselves in Spain. They become embroiled in the fighting and complicated politics out there, between French and Spanish, Christians and Muslims, between warring Spanish realms, and discover the blurring of lines of loyalty. That motley crew of companions expands, with the wonderfully-drawn character of Fernand. In a way he is a rather minor character, but he absolutely has to be there in order for the story to be told, and to watch his development as a young man growing to full adulthood over the course of the novel, was a joy.
Fernand's story, and his initial attitudes to life are also an example of a thread running through the book, which shows how everyone is constrained by their social status. Even the high born cannot choose their own paths. Some characters' lives are in danger simply because of who they are; their birthright endangers just as much as it protects them. Anyone who manages any social mobility must constantly defend that jump.
The book is perfectly paced, the action interspersed with quieter moments, but always cleverly building to the next high-octane scene. There is so much to absorb here. The above-mentioned societal rules, the complicated and often ruthless, even barbaric, politics of the region, the heart-stopping action and battle scenes, the tender love scenes, the careful early setting up of later scenes, when the actions of certain characters lead to severe consequences...
And yet, this is not a difficult read. Ms Belfrage blends her characters and their stories so seamlessly that I had no idea who was real and who was fictional.
This, of course, is easy to do when you are a master of story-telling
Reviewed for Discovering Diamonds