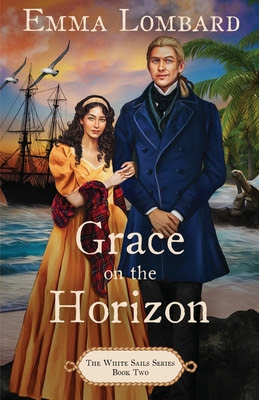 Amazon UK
Amazon US
Amazon CA
Amazon AU
Goodreads
fictional drama / nautical
19th century
various locations
"GRACE ON THE HORIZON is the second full-length novel in The White Sails Series. Grace and Seamus, united by their past experiences, are adrift on a raft of shame in the sea of 1830s London society. After a personal tragedy, Grace’s desperation to leave London forces Seamus to accept a dubious commission on the private explorer, Clover.
With the expedition financed by Colonel Hamilton and his private backers, Seamus is tasked with mapping a round-the-world voyage. But Colonel Hamilton has an additional package that requires delivering—Father Babcock—a priest wanted for murder. The church wants Babcock transported far from England to set up a new mission in South America.
Battling his overprotectiveness, Seamus breaks his oath to always tell Grace the truth and hides Babcock’s identity from her. But the journey aboard the Clover is far from smooth sailing, and Grace suspects a saboteur. Trapped within the ship’s confines, she must learn to forgive her husband's well-intentioned duplicity and determine who wishes them harm—because now she also has her unborn child to protect.
Is it an aggrieved member of the Admiralty who believes Seamus disgraced the service by resigning his command to chase after Grace? Perhaps Grace’s father, Lord Flint, seeking revenge against her for ruining the family name? Or a jealous suitor determined to ruin the life Grace is trying to build with Seamus?"
I'd say it's advisable to read the first book in this series of two. Although the author alludes to the plot, it is important to know what happened to Grace and, indeed, to Billy, in the first instalment. It is mentioned, but perhaps not in enough detail for those readers who are meeting the characters for the first time. The full horror of Silverton and his hatred of Grace can only truly be appreciated, if that is the right word, by reading Discerning Grace (which I reviewed earlier in the year).
That said, once again Ms Lombard shows an almost encyclopaedic knowledge of the workings and working parts of a nineteenth-century sailing ship. The descriptions of the daily life on board and, more particularly, what happens during a storm, are incredibly detailed and realistic. In fact, in all her scenes, it feels as if one is not reading, but watching. She has a deft knack of writing all her scenes in such a way that you can, at any point, see clearly every person in the room and know how they are positioned and where. It's uncanny. Because of this deftness, she is able to manipulate the reader, making the pages turn quickly, which perfectly suits the fast-paced action. You hurry to keep up with the action and yet, you pick up all the visual detail along the way.
Grace was, in the first book, quite hot-headed, prone to acting first and thinking later. I'm pleased to see that she has grown up, and that marriage not only suits but has mellowed her. Does this mean her spirit is quashed? Absolutely not. She finds herself in a great many scrapes, but not through any fault of her own, and she calculates her responses carefully. It doesn't mean she doesn't end up in trouble though. Seamus, too, has become a little older and wiser, but he is hidebound by his loss of reputation and his determination not to repeat his past mistakes. Not easy, when others are in no mood to forgive perceived wrongs.
The plot keeps you guessing, the interludes when the Clover drops anchor at various far flung locations are descriptive and eventful, and the sense of strong friendships forged by years together on board is touchingly presented.