A Discovering Diamonds review of Discerning Grace by Emma Lombard 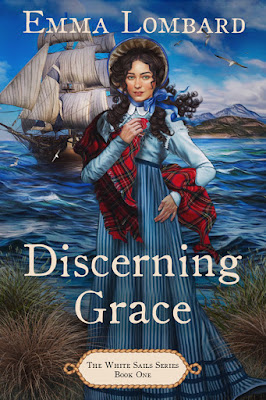 Amazon UK
Amazon US
Amazon CA
Amazon AU
Goodreads
fictional saga / nautical /romance
1800s
Book 1 of a proposed series
"Wilful Grace Baxter, will not marry old Lord Silverton with his salivary
incontinence and dead-mouse stink. Discovering she is a pawn in an arrangement between slobbery Silverton and her calculating father, Grace is devastated when Silverton reveals his true callous nature. Refusing this fate, Grace resolves to stow away. Heading to the docks, disguised as a lad to ease her escape, she encounters smooth-talking naval recruiter, Gilly, who lures her aboard HMS Discerning with promises of freedom and exploration in South America. When Grace's big mouth lands her bare-bottomed over a cannon for insubordination, her identity is exposed. The captain wants her back in London but his orders, to chart the icy archipelago of Tierra del Fuego, forbid it. Lieutenant Seamus Fitzwilliam gallantly offers to take Grace off the fretting captain's hands by placing her under his protection. Grace must now win over the crew she betrayed with her secret, while managing her feelings towards her taciturn protector, whose obstinate chivalry stifles her new-found independence. But when Grace disregards Lieutenant Fitzwilliam's warnings about the dangers of the unexplored archipelago, it costs a friend his life and she realises she is not as free as she believes."
This novel, the first in a series, takes the reader across the high seas, and I have to say straight away that the descriptions of life aboard one of His Majesty's ships in the 1820s is vividly and, I assume, accurately portrayed. Readers who love a romance will enjoy being swept away to uncharted lands and being swept off their feet by the slow-burn of Grace's and Seamus' will-they-won't they, can-they-can't-they relationship.
Ms Lombard has a real talent for writing dialogue which flows naturally, feels realistic, and ensures that each character can be easily distinguished by their speech patterns. She also has a knack for describing physical movement, so that we know exactly how the characters are interacting with each other and we can really see them moving around the scenery.
The plotting is tight, and clever. A few times I found myself thinking 'but surely' or 'what about' only to have it almost immediately explained. Just one example: I thought that the men would surely not like having a woman on board, as they are supposed to be bad luck, and on the very next page, that issue was addressed and set up beautifully for the animosity which was to come. I made a note about the opening scenes which didn't ring quite true for me, and was ready to highlight this in my review, but then it was all cleverly explained, and everything slotted into place. I don't think there was a single plot thread that hadn't been neatly tied up by the end. I got cross with Grace when, almost out of character, she left the ship, with dire consequences, but again, her remorse was real and she learned her lessons.
At one point a sailor uses an expression which only came into being in the 20th century, and there were a few out-of-place words: French doors instead of windows, audaciousness instead of audacity, and loathed instead of loth, loath or even loathe: "He was loathed to do it", for instance, along with "gob-smacked" which really jarred. (I was amazed to discover, when I looked it up, that it dates from the 1930s - I thought it was much more modern!) But the book is otherwise excellently edited and researched. I felt the scenes aboard the ship were perhaps stronger than those on land but ultimately this is an adventure on the high seas and most of the action takes place there and the book is unusual, I think, for being set on board a ship in this era. Readers will be pleased to know that there are more books planned and, presumably more challenges ahead for Grace.
Reviewed for Discovering Diamonds