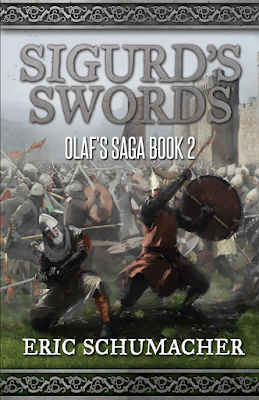 Over the last few years, I have had the recurring pleasure of deep diving into the history of my native Scandinavia, all at the hands of Mr Schumacher. After his initial series featuring Haakon the Good, Sigurd’s Sword is the second in his new saga, this time featuring Olaf Tryggveson.

Yet again, Mr Schumacher presents us with a central character who is more boy than man—and as an aside, he does an excellent job of depicting the challenges related to growing up, giving us sullen teenagers who, through circumstances, are obliged to shoulder more responsibility than they should. Olaf may be only sixteen when Sigurd’s Sword opens, but he and his somewhat older oath-sworn companion Torgil, have already survived more adversity than most, both of them sworn to serve Lord Sigurd, Olaf’s maternal uncle, as hirdsmen. *

Torgil is our narrator, a serious young man who is more than aware of his shortcomings and does his best to compensate for them. Life has given him something of a millstone in Olaf, this boisterous, loud, overconfident and self-serving former prince who fully intends to return home one day and claim the throne that is rightfully his. It is to Mr Schumacher’s credit that he presents us with such an endearingly dislikeable young protagonist as Olaf. There are times when I would gladly kick him off the pages permanently, and fortunately (for me) Sigurd’s Sword is mostly about Torgil and the various misfortunes that befall him and his companions as they fight for Prince Sviatoslav, ruler of the Rus.

Mr Schumacher takes us on quite the journey along the waterways of present-day Russia. From Holmgård (Novgorod) through Konugård (Kiev) and all the way down to the Black Sea and beyond, Mr Schumacher expertly pilots his dragon-headed vessel, while on board Torgil worries about what the fates might have in store for him. You see, Prince Sviatoslav suffers from hubris and dares to encroach on Byzantine territory. For that, he and his men will pay a very high price, one paid in blood and hunger, in pain and suffering.

Torgil is not really concerned about his own safety. Like most Norsemen, he believes it is all in the hands of the Norns, (the fates) and if he has to die, he hopes he will be able to do so courageously. But travelling with Lord Sigvard’s hirdsmen is one shieldmaiden, and Torgil loves Turid—has loved her for years—and would gladly risk his life to keep her safe. Except he can’t, as Turid would never forgive him if he did not trust her enough to hold her place in the shield wall.

When the superior forces of the Byzantine empire amass, it is in itself a spectacle—proof of just how much research Mr Schumacher has done to bring to vivid life everything from siege towers to the feared Greek Fire. Contrasting with all that splendour is Torgil and his companions, men who have but their weapons and their shields, who are far away from home, oath-sworn to die for a prince they neither trust nor like.

The resulting battle scenes are impressively well-written, submerging this reader into a sweating, writhing mass of men bristling with blades and spears. There is no overview, no way of knowing if you are winning or losing, there is just one more man to fight, another and another, until there is a brief moment of respite, seconds in which to stare at the dead and injured that crawl in the mud before you’re dragged back into fighting—or dying.

It requires an effort to surface from the world of Torgil and Turid, to leave behind this gripping depiction of the 10th-century Rus, their allies and enemies. I am already looking forward to the next instalment in Olaf’s story. If it is anything like Sigurd’s Sword, it will be an excellent read!