Circus Maximus: Race To The Death by Annelise Gray 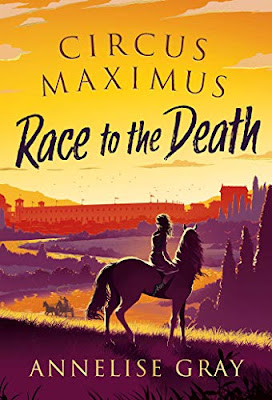 Young Adult /Fictional Drama
Ancient Rome
"Twelve-year-old Dido dreams of becoming the first female charioteer at the great Circus Maximus. She's lost her heart to Porcellus, a wild, tempestuous horse she longs to train and race. But such ambitions are forbidden to girls and she must be content with helping her father Antonius – the trainer of Rome's most popular racing team, The Greens – and teaching the rules of racing to Justus, the handsome young nephew of the Greens' wealthy owner. When her father is brutally murdered, she is forced to seek refuge with an unlikely ally. But what of her dream of Circus triumphs and being reunited with the beloved horse she left behind in Rome? And the threat to her life isn't over as she faces a powerful and terrifying new enemy... the emperor Caligula."
Dido has grown up in the world of chariot racing in ancient Rome, her father being the trainer for the famous Green faction, the most popular in Rome among the people, and with a young man called Caligula, great nephew of Emperor Tiberius. However, Dido is not content to stand back and watch, and under the reluctant tutelage of her father, she learns to handle a pair harnessed to a chariot, training her own horses, including a rather inauspicious steed called Porcellus. But disaster strikes and Dido must flee for her life, leaving behind all she knows, including Porcellus, and faces an uncertain future in north Africa, her deceased mother's home.
Annelise Gray has written a fabulous little tale for teens but one that can be read and enjoyed by anyone old enough to read it. I thoroughly enjoyed it. She conjures a world that focuses on the racing, a cross between Formula One and Premier League football, the same tribalism, the same hero-worship.
I do enjoy young adult novels for their plot and action - with no adult content, the plot and characters have to stand up for themselves and they do so here very well. Romance is hinted at and the reader, if they are old enough, can imagine the rest and find the romance in the story.
I can't help but think that this novel owes a lot to the success of Caroline Lawrence, following in her footsteps, but Ms Gray does it very well. The story races on but is never dull, no boring bits, with tension and conflict aplenty. The cover is emotive, certainly tells you what you are going to read about, brightly coloured that would be pleasing to younger readers.
I'm an older reader and I can't fault it.