Mercies of the Fallen, by Eileen Charbonneau 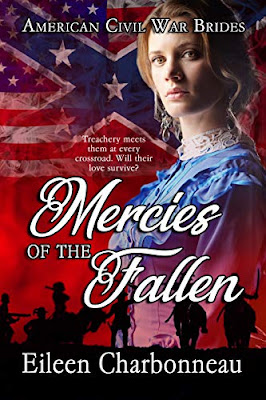 Amazon UKAmazon USAmazon CAAmazon AUGoodreads
Romance /Fictional Saga
1800s
American Civil War
Mercies of the Fallen is exactly my cup of tea. The story strikes the right balance between historical fiction and historical romance where there’s a central love story in a historically meaty era.
The second instalment of a standalone series, Mercies of the Fallen is set during the American Civil War. Although a couple of characters from the first book, Seven Aprils, make an appearance, either story can be read and enjoyed in any order.
Ursula Kingsley is a novice and prepares to take her vows, but the war interrupts these plans. Her family’s Maryland plantation becomes the site of a makeshift Union hospital, and Ursula rolls up her sleeves to help the wounded.
Rowan Buckley is a Union soldier regains consciousness after a battle in Maryland. Due to his wounds, he’s unable to see. His eyes are bandaged and he’s not sure where he is, but he’s aware of a kind pair of hands, a soft voice and the comforting scent of lemon balm. Over weeks of recovery (still without his eyesight), he forms an emotional bond with a nurse in this makeshift hospital. Ursula’s brother is anxious for his sister’s future and strangely encourages the man’s interest. Rowan hardly needs the encouragement because he’s smitten, but there’s a mystery here that he can’t figure out.
When he’s transferred to a Washington hospital to recover, his vision is slowly restored and he learns that Ursula is suspected of being a spy for the South and the army recruits his aid to spy on her.
The romance strikes the right notes for me. This is a well-written romance where the circumstances—political and social—complicate the relationship and strengthens the bond. Rowan has an ingrained and unshakable sense of decency. We need more Rowans in this world. Ursula is a healing balm for those who are suffering around her, and her difficult circumstances and her past keep her from being a two dimensional character. At times the events paralleled today’s fraught world.
The author elevates the story by showing us the diverse backgrounds of the men who fought for the Union. Rowan, an Irish Canadian immigrant, decided to fight for the Union because he was opposed to slavery. The side characters were an absolute joy: Ursula’s quirky brother and one of the “Maries”, a French Canadian woman who is a force to be reckoned with, were both favourites of mine.
Mercies of the Fallen has excellent writing, solid pacing and a tender romance. Well worth the read. Highly recommended!
Reviewed for Discovering Diamonds
© Cryssa Bazos e-version reviewed