His Castilian Hawk by Anna Belfrage 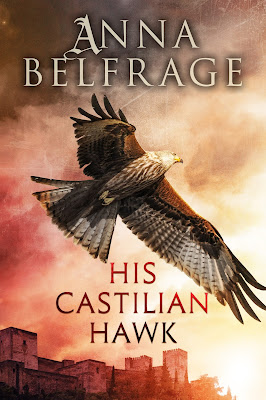 "For bastard-born Robert FitzStephan, being given Eleanor d’Outremer in marriage is an honour. For Eleanor, this forced wedding is anything but a fairy tale. Robert FitzStephan has served Edward Longshanks loyally since the age of twelve. Now he is riding with his king to once and for all bring Wales under English control.
Eleanor d’Outremer—Noor to family—lost her Castilian mother as a child and is left entirely alone when her father and brother are killed. When ordered to wed the unknown Robert FitzStephan, she has no choice but to comply.
Two strangers in a marriage bed is not easy. Things are further complicated by Noor’s blood-ties to the Welsh princes and by covetous Edith who has warmed Robert’s bed for years.
Robert’s new wife may be young and innocent, but he is soon to discover that not only is she spirited and proud, she is also brave. Because when Wales lies gasping and Edward I exacts terrible justice on the last prince and his children, Noor is determined to save at least one member of the House of Aberffraw from the English king.
Will years of ingrained service have Robert standing with his king or will he follow his heart and protect his wife, his beautiful and fierce Castilian hawk?"

I've spent a week in the company of a wonderfully memorable set of characters. In His Castilian Hawk, Ms Belfrage wastes no time but plunges us straight into the action and therefore into the heart of the story. And what a story it is.

One of the main themes is loyalty, but this is a tricky thing because loyalties here are not only divided, but constantly tested. This has the added bonus of testing, at times, the reader's loyalties or at least playing with our emotions as we are every now and then given reason to sympathise, if only a little, with characters whom we've dismissed as hateful through and through. All this has the result of making all the characters very rounded and very human.

The complicated political situation between Wales and England during the reign of Edward I is skilfully pared down so that we are given just enough information to help us understand the historical context without bogging us down with too much political detail. The main characters perform against this historical backdrop but the book tells their story, not that of kings, queens and princes. That said, King Edward is also presented as a complex character. Historically he is known as the callous oppressor of the Welsh, but was also known for being a loving and faithful husband. Ms Belfrage does a marvellous job of reconciling these two seemingly incompatible character traits, showing a man who was actually uncompromising in both. The development of his beloved wife is a perfect study of what would happen to a mother of potential kings, as is that of Elisabeth, mother of potential Welsh princes.

At the heart of the story though is the burgeoning love affair between Noor and Robert, hampered as always by his previous relationship with Edith. This awkward love triangle is central to the novel, but is not the only plot thread. What I especially loved was how these multiple threads kept interweaving and, while some were tied up, others were left so there were lots of moments when I thought 'oh yes, but what about...' Every tiny detail was planted perfectly, and the story flowed beautifully with a natural rhythm.


This really is a masterclass in how to write historical fiction/romance. The occasional word sounded maybe a bit modern for the period, but such is the author's authority that I found myself thinking I was probably wrong! There is so much period detail in this book; not shoe-horned in but expertly added so that every scene comes alive. This is a fairly long book, but I rattled through it because I just begrudged any time when real life intruded and made me put it down.