A Discovering Diamonds Review of Soldiers Of Freedom Samuel Marquis 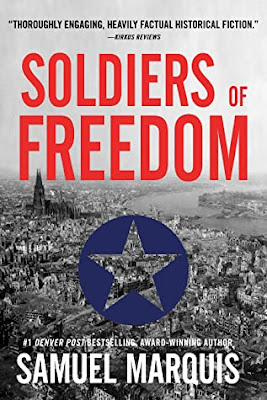 Military
WWII
Europe
#5 in a series

"Soldiers Of Freedom is the true story of the 1944-1945 War in Western Europe and the final Allied struggle to conquer Nazi Germany. The story is told through the eyes of William McBurney, a tank gunner in the 761st Tank Battalion, the first African-American tank unit in U.S. history; dynamic General George S. Patton, Jr., commander of the U.S. Third Army; and Angela Lange, a sixteen-year-old German resistance fighter with the anti-Nazi Edelweiss Pirates in Cologne. While Patton's forces liberate France and Belgium, fight in the grueling Battle of the Bulge, and cross the Rhine to conquer Germany, U.S. tanker William McBurney and his Black Panthers must fight two wars at once: one against the German army, the other against the racism of their fellow white soldiers. Meanwhile, as the Allies drive into Germany, Edelweiss Pirate Angela Lange must survive the Allied bombing of Cologne while she engages in fierce resistance against the Hitler Youth and Nazis and is hunted down by the Gestapo."

The Allied struggle with the war with Nazi Germany in Europe is expertly dealt with in this interesting novel. Based on a true story the author has created, through meticulous research, an account of those last efforts of the war, when everything depended on success.

I particularly enjoyed the character of  tank gunner William McBurney from the 761st Tank Battalion, fighting alongside General Patton and the 'Black Panthers', but the other characters were as intriguing to follow during this tale full of adventure and sacrifice.

The detail of war, and its consequences were expertly written, there were  issues of racism which were sensitively dealt with, and I found it interesting to read a novel about the American involvement in WWII rather than, as a Brit, the usual British view.

Recommended by readers who enjoy  the narrative of war stories