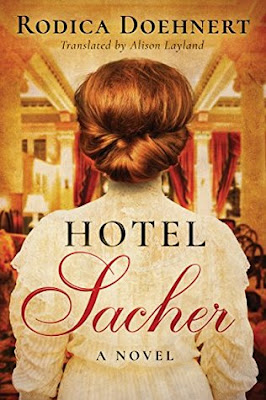 In the exclusive Hotel Sacher, the proprietor Eduard Sacher is dying. His wife Anna is doing what she sees as her wifely duty by checking on her husband from time to time and seeing that the hotel is running as smoothly as the guests expect. She hopes to continue managing the hotel after her husband’s passing and feels she is fully capable of doing so. Her father-in-law, who is in retirement, arrives and tells her he has other plans. He wants to sell the hotel, and cannot imagine that Anna – a woman and mother of young children – can run it properly.

Two couples arrive that same night. Maximilian and Martha Aderhold from Berlin are on their honeymoon. They have come to Vienna to find authors for their new publishing house. The second couple is Prince Georg von Traunstein and Princess Konstanze. Their six-month-old marriage is not a love match but one of mutual benefit, she having Money and he having a Name. These two couples along with the disappearance of a young employee of the hotel provide a web of plots that are intertwined. The Sacher Hotel is the hub against which the pivotal events of their lives are played out.

Two other unusual characters deserve a mention: Love and Death. As soon as I read in the prologue, of Love taking a seat in the foyer and Death climbing a rear wall of the rear of the hotel, I was hooked. And inevitably I said to myself: I wish I had thought of that.

Through the author’s deft writing we see romance, politics, war, infidelity, tragedy, some happy endings, some not so happy, and women’s attempts to traverse the outer reaches of the Imperial court. We examine women’s tottering steps at self-reliance and the tremendous strength it takes to remain independent, and the many aspects of love. The plot is character-driven and the characters are believable, true to themselves.

The author plays out the story line skilfully and subtly. So, to summarize, the book is brim-full of interest.

I have one caveat. There is quite a long list of characters, and the narrative hopped about between them in, sometimes, short segments. Since most of the characters are fictional, I think some of these sections could have been combined in a longer sequence. It would have made the story flow better.

Even so, I thoroughly enjoyed this book, one of the best I have read in a long time, and recommend it for anyone who fancies something different.

Anna Sacher and her children were real people, and the Sacher Hotel still exists today. I was in Vienna five years ago on one of those self-indulgent/research jaunts, but I never saw the hotel. If I had, I might have popped in for a cup of tea and a slice of the famous Sachertorte, a chocolate cake created by Anna’s father-in-law. There is a recipe for it at the beginning of the book.