The Copper Road by Richard Buxton 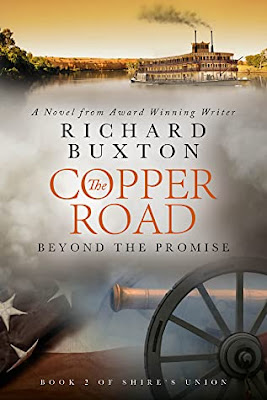 "Shire is far, far from home, his old life in Victorian England a fading memory. To keep a promise to his childhood love, he’s sailed an ocean and battled through war-torn America. He’s kept his promise, but now Clara’s pushing him away. The war won’t let him go. Fighting for the Union and his friends, Shire must survive the brutal campaign for Atlanta and imagine a future without her. After a violent end to a cruel marriage, Clara is free from her husband but not from his ghost. All that is left to her is Comrie, her home in the Tennessee hills. But the war relentlessly steals away its treasures and its people. Tod, a captured Rebel, escapes in Pennsylvania. His adventures on the roads and rivers back to his regiment cast the Civil War in a new light. Does he still have the will to fight? Three young lives become wrapped in the Rebels’ desperate need for copper. Friendships, loyalty and love will be tested beyond breaking point. Shire has new promises to keep."

This might be one of the best American Civil War novels that I have read.  Richard Buxton writes with passion for his subject and his characters, bringing both to life with detailed research and superb writing skill.
We meet the three lead characters, Shire himself, Clara and Tod, and immediately like them, are immediately immersed in their lives, their hopes, dreams, despairs, and immediately want them to be happy. (Whether they succeed, I'll not divulge.)
Although the American Civil War is the major backdrop to this novel, Richard Buxton's details of battle and life as a soldier are amazing; the story itself is very much character-driven. It is not a story about The Civil War, but about the people and their lives during the war. I'm tempted to say that The Copper Road is a modern-day Gone With The Wind, but to be honest it isn't ... it's far far better than that.
This is a second novel in a series, the first being Whirligig (which I also enjoyed) and it is quality from cover to cover.