A Discovering Diamonds Review of Discovery by Barbara Grieg 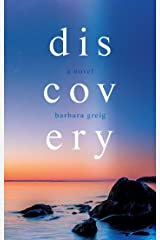 
This novel concerns the principal descendants of Luis Gharsia who is dying.  Elizabeth is the daughter of Luis and Margaret Weaver whilst Gabriel, Elizabeth's nephew, is his grandson. Gabriel is intent on going to New France (Canada), signing up for two years' service with his friend and neighbour, Luc.

The opening chapters give us some background to Luis' life and events leading up to the main story. Twenty years later, Elizabeth's brother, Thomas, returns from Marseilles with a man, Pedro Torres, he has befriended, rescued from destitution and made steward of the estate and business Luis has willed to them. Thomas is a student, a fervent Huguenot and has little interest in the estate. Pedro's dream is to serve out his obligation and travel to the Netherlands where he feels he will be able to follow his Islamic beliefs without the threat of persecution.

Meanwhile, in Canada,  Gabriel becomes involved in a vicious war between two of the local indigenous tribes, is kidnapped by his friend, a Mohawk, and accepted into that tribe. As the months and years pass, his family at home despair of seeing him again.

All that sounds complicated, but the narrative flits from continent to continent in a structured manner, and the characterisations, especially that of Elizabeth, are tight.

The main thrust of the story, however, is really the discovery of Elizabeth's mother's journals amongst Luis' effects. The secrets they reveal and the questions that they both answer and further ask, keep us intrigued as we watch the initially frosty relationship between Elizabeth and Pedro slowly begin to thaw.

I enjoyed this book very much. There is a small touch of graphic violence during the Canadian episodes but never too much. The various relationships between the Gharsia family do get complicated but the author has provided a list of characters at the beginning  which includes how they are involved with each other. There is plenty of scope for a sequel, but all the loose ends are tied up satisfactorily.