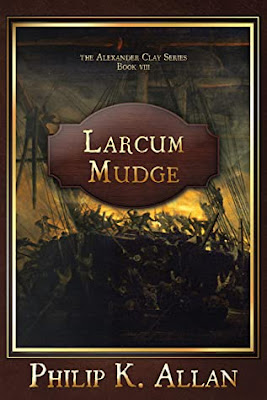 Larcum Mudge is the eighth installment in Philip Allan's marvelously engaging "Alexander Clay" Napoleonic-era series. It’s somewhat hard to believe that this series of nautical novels launched less than three years ago with The Captain’s Nephew. It’s even harder to believe that author Philip Allan shows no signs of running out of steam even after producing eight 300-odd page volumes in such a brief space of time.

I am not a voracious reader of nautical fiction. Rather, I’ll read a novel in any genre as long as it’s outstanding writing. Philip Allan has never disappointed me in that regard and his prodigious talent again shines brightly in Larcum Mudge. (I note this volume marks the author’s break with his previous publisher, PenmorePress, but readers will detect no change in the high level of editorial polish and fastidious layout.)

We catch up with our rather complicated protagonist, now - Captain Alexander Clay, as he takes up his new post as master and commander of the Royal Navy frigate Griffin, having just slipped the ways at Portsmouth. He and his crew, several of whom having been with Clay since his days as a lieutenant, are immediately dispatched to the Caribbean on a mission to recover a ship lost to mutineers who sold her to the French on Guadeloupe. The mutineers then dispersed to the four winds, an intriguing fact that contributes surprising twists to the story.

When Clay and his crew—including the very skilled and equally mysterious new crew member Larcum Mudge—reach Guadeloupe, they discover not only His Majesty’s purloined ship Peregrine, but also that the French have smuggled in a ship of the line able to outgun any vessel in the British squadron home ported on Antigua. Dealing with these two vessels occupies the remainder of this rollicking narrative, told with the characteristic deftness, detail, and nuance of all Allan’s novels.

In addition, Captain Clay is confronted by some hard realities regarding the rampant casual corruption in which several of his fellow officers are regularly engaged, allowing the author to explore more of the moral ambiguities that have dogged the protagonist throughout his career at sea. By the end, however, the warring nations reach an exhausted agreement at Amiens. With the fighting ended and peace descended, Clay heads home to his family—now augmented by the arrival of a new daughter. But readers should not despair, since even a passing acquaintance with the history of the Napoleonic Wars will relieve any trepidation that Clay and his crew will remain ashore for long.

Early on in my reading of Larcum Mudge, I noted that the author was violating one of the many hoary maxims for novelists—don’t begin books or chapters with the weather. Allan does this in most sections of this books and I was growing a little peevish over it. About a third of the way through, it dawned on me what he was about. This was, I’m fairly sure, a mimicking of how a ship’s master begins log entries, there being nothing more important during the age of sail than the weather and sea conditions. Thereafter, I found this an excellent literary device, subtly imparting a sense of the episodic structure of a ship’s log while not inhibiting the irresistibly page-turning pace characteristic of all the author’s books. I have thereby grown in my already substantial admiration for Mr. Allan’s skills.

Larcum Mudge is a wonderful read for both devotees of nautical fiction, as well as demanding readers who seek the very best quality writing regardless of genre. I highly recommend this novel, as well as its sibling volumes.