The Poison Keeper by Deborah Swift 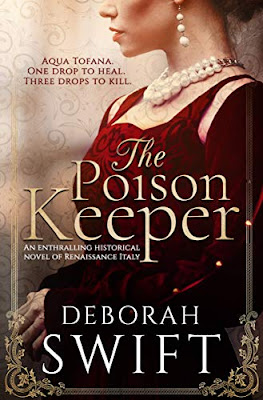 Fictional drama
17th century
Naples / Italy
"Naples 1633. Aqua Tofana – One drop to heal. Three drops to kill.
Giulia Tofana longs for more responsibility in her mother’s apothecary business, but Mamma has always been secretive and refuses to tell her the hidden keys to her success. But the day Mamma is arrested for the poisoning of the powerful Duke de Verdi, Giulia is shocked to uncover the darker side of her trade.
Giulia must run for her life, and escapes to Naples, under the shadow of Mount Vesuvius, to the home of her Aunt Isabetta, a famous courtesan. But when Giulia hears that her mother has been executed, and the cruel manner of her death, she swears she will wreak revenge on the Duke de Verdi.
The trouble is, Naples is in the grip of Domenico, the Duke’s brother, who controls the city with the ‘Camorra’, the mafia. Worse, her Aunt Isabetta, under his thrall, insists that she should be consort to him.
Based on the legendary life of Giulia Tofana, this is a story of hidden family secrets, and how courage and love can overcome vengeance.
Ms Swift is one of those authors who can pick a reader up and simply drop them into any given historical setting, and she's equally at home writing about the 17th or the 20th centuries. The Poison Keeper is a slight departure, in that it's set in Italy, but again, whilst it's clear that the author has worked very hard to research the period and geographical detail, she's done it all so that we don't have to. That detail sits lightly on the page, so that you just feel like you're inhabiting the world you're reading about.
Whilst this story is based on a real-life character, I'm full of admiration for the plot twists and turns which I feel have come from the mind of the author rather than the pages of the history books. Much of Guilia's life is either undocumented, or the sources disagree, so full marks to Ms Swift for turning what must have at times been a frustratingly incomplete picture into such a page-turner.
This book gives it all - drama, tension, intrigue, and fully-rounded characters, believable relationships and a main character who grows and develops during the course of the novel. I enjoyed reading Guilia's story, although my heart was in my mouth several times, and I also learned a lot about life in 17th-century Naples. I was vaguely aware of the Camorra, and more so of the powers of the Inquisition, but it was interesting to see how these threats affected the daily lives of ordinary people. Along the way we learn a great deal about various trades, and lifestyles - in particular what was expected from the courtesans - and how in this age women were still very much regarded as inferior, as sinners, and had to find their freedoms and independence where they could. Reading the book you feel as though you can see, smell and hear the streets of Naples, and feel the heat, oppression and the danger.
This is the first in a planned series and while I'm eagerly awaiting the next instalment, this can easily be read as a standalone.
Highly recommended.
Reviewed for Discovering Diamonds
© Annie Whitehead
e-version reviewed