A Discovering Diamonds Review of The Cotillian Brigade by Glen Craney 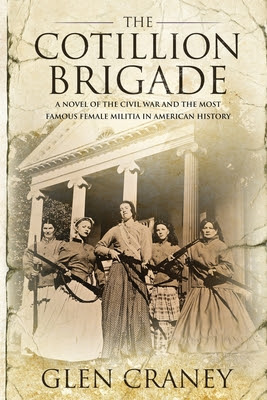 fictional drama /
nineteenth century / US Civil War
U.S.A.
"1856. Sixteen-year-old Nannie Colquitt Hill makes her debut in the antebellum society of the Chattahoochee River plantations. A thousand miles to the north, a Wisconsin farm boy, Hugh LaGrange, joins an Abolitionist crusade to ban slavery in Bleeding Kansas.
Five years later, secession and total war against the homefronts of Dixie hurl them toward a confrontation unrivaled in American history. Nannie defies the traditions of Southern gentility by forming a women’s militia and drilling it four long years to prepare for battle. With their men dead, wounded, or retreating with the Confederate armies, only Captain Nannie and her Fighting Nancies stand between their beloved homes and the Yankee torches.
Hardened into a slashing Union cavalry colonel, Hugh duels Rebel generals Joseph Wheeler and Nathan Bedford Forrest across Tennessee and Alabama. As the war churns to a bloody climax, he is ordered to drive a burning stake deep into the heart of the Confederacy. Yet one Georgia town—which by mocking coincidence bears Hugh’s last name—stands defiant in his path."
I'm finding that I'm drawn more and more to books set before, during, and immediately after the American Civil war. I learned a great deal from The Cotillian Brigade, comfortable in the knowledge that the author has done his research thoroughly. I knew that Nannie was a real-life character but I didn't know how many of the others were and it's a testament to the author's skill that, actually, it didn't matter - Mr Craney has woven such a good fiction out of real stories and made it all fit, and look as if he was not hidebound by having to work round 'stubborn history'. One example is towards the end, where Hugh makes a choice about where his heart really lies. I was astounded to read later that this was all true.
There is, perhaps, one 'stubborn' piece of history which couldn't be worked around, and that pertains to how much 'action' the Nancy Harts actually saw. On the other hand this really highlights the differences between the men away fighting and the women staying at home doing what they could. This was further served by the author showing only the soldiers of the north in action, and only the women of the south. Thus we never see what the northern wives and mothers were up to, nor what the southern soldiers were doing unless they came up against the Unionist troops. This helped both to polarise the stories, but ironically also to show how the two sides were going through essentially the same experience.
The book is long, with quite a slow beginning. This build up helps to introduce the characters and, of course, show us a little of their lives before the war ripped those lives apart and I think we needed to see that change. There's a lot of scenes where the characters are seen quoting long chunks of poetry and lines from plays, which perhaps could have been cut back a little, but overall I think this needed to be a big book. You need to feel that you've spent time with these people and that you've watched them all the way through the war. The dialogue was natural, and the characterisation very good, to the point that not all the characters are sympathetic, but this made them all the more human.
I have to say that I also appreciated the author's notes and specifically the photos at the back.
So yes, a long read, but a rewarding one. Recommended.
Reviewed for Discovering Diamonds