A Discovering Diamonds Review of The Usurper King, by Mercedes Rochelle 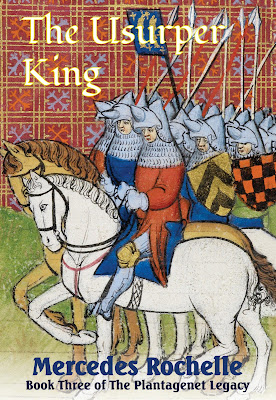 Fictional Saga
14th Century
England
#3 of a trilogy
In this last of Mercedes Rochelle’s trilogy of the life of Richard II, much of the focus – inevitably – is on Henry Bolingbroke, Richard’s cousin, the man who would depose Richard and become Henry IV. Exiled to France Henry discovers to his shock and disbelief that he has been disinherited. Richard has stripped him of all his lands and titles. This is one straw too many for the exiled Bolingbroke, and he resolves to reclaim his birthright.
Bolingbroke is portrayed as a remarkably sympathetic character, one whose journey from simply wishing to reclaim what is rightfully his, to the usurper king he became, is shown in an incremental hardening of belief that Richard has gone too far – not only in dealing with his cousin, but in his treatment of the nobles of England as a whole. Gathering about him a number of sympathetic nobles, among them Henry Percy, ‘Hotspur’, the son of the ancient and powerful Percy family of Northumberland, he slowly moves towards Richard’s downfall.
While it is generally believed that Richard II died at Pontrefact, possibly by starving to death, Rochelle offers an alternative end to Richard’s life, one for which there is some tantalizing historical evidence. Rumours that Richard was alive led to more unrest in England, while in Wales, Owain Glyndŵr’s uprising kept Henry IV busy – and perhaps allowed Henry Percy, who had by now thrown his support behind Edmund Mortimer, to gather arms and men against him.  Mortimer, the 3rd Earl of March, was Richard II’s heir presumptive, but only a child at the time of Bolingbroke’s capture of the throne.
The strength of The Usurper King is in the details, and in Rochelle’s ability to present the complex politics of the period in a way that makes for an easy read. The last chapters, leading up to the Battle of Shrewsbury, are particularly exciting, and her portrayal of the broken, desolate Richard II is convincing and empathetic. One or two inaccurate botanical details detracted a little for me, but not seriously. A useful chart of nobles and their titles is provided for readers (like me) not fully cognizant of who was who in the period, especially as titles often changed hands. Overall, I found The Usurper King a competently told story that taught me much about a period of English history I previously knew little about.
Reviewed for Discovering Diamonds