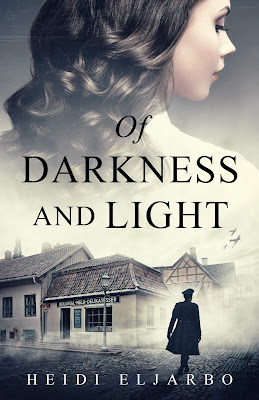 Fictional Drama
WWII
Norway
"Oslo, 1944. Soli Hansen’s passion for art history is and always has been a way of life for her. While she spends her days working in an art shop, WWII is taking its toll on everyone. Apprehensive of the consequences, Soli avoids becoming entangled in the war resistance efforts. She closes her eyes in hopes the enemy will retreat and leave her beautiful country for good. But when a woman is found dead in the alley alongside the art shop and a painting from the last auction goes missing, Soli is thrown into the thickest of the fray involving both Nazi art theft and the Norwegian resistance. Once Soli finds her courage, there’s no turning back. Her personal life is turned upside-down with danger, lies, spying, and an incredible discovery. In this dual timeline novel, Heidi Eljarbo paints a vivid picture of what people are willing to do in desperate times. With unforgettable characters and rich historical details, Of Darkness and Light will keep the reader mesmerized until the last satisfying page."
The story opens as Norway is being invaded by the Germans when 18-year-old Soli sees a fleet of bombers thundering past, above her quiet country home. The story then moves to occupied Oslo, August 1944, where we find her employed by Mr Holm, a fine art dealer who values her skills and training in all aspects of Renaissance and Baroque art.
She arrives at work one morning to find their cleaner dead by the rubbish bins. How did she die? Was she murdered? Until that point Soli has managed to stay clear of politics, the Germans and any serious involvement with the war. But now, the war comes to her. She can’t avoid being involved.
What was the painting that everybody seemed to be looking for? Who could she trust? All is not as it seems.
The story is fast-paced and exciting. I enjoyed the fascinating blend of recent history and mediaeval art, seen through the story of Caravaggio, and am looking forward to the next in the series.
Reviewed for Discovering Diamonds
© Robyn Pearce
e-version reviewed

<previous   next >
Due to our increased popularity,
from 1st September we will be reviewing
a book every weekday
(but not weekends)
< You will find several items of interest on the sidebar