The Whistling by Rebecca Netley 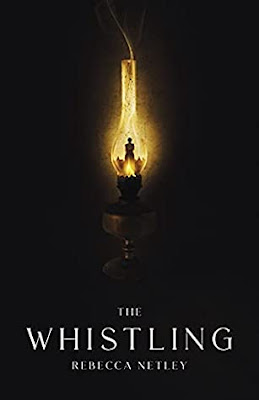 Releasing a ghost story on Hallowe'en [albeit we are a day late here on DDRevs] is a great idea, and, if you sit up all evening to read this, you will get to the spine-chilling conclusion at around the witching hour. And it would be worth persevering.
On the island of Skelthsea in 1860, Elspeth accepts the position as nanny to a young girl who has been mute since her brother was killed. An orphan, she lives with her aunt, Miss Gillies, in Iskar, a strange old house that has a tableau of characters who may or may not be friendly, and the presence of the dead brother and the previous nanny who, Elspeth is told, left for a new life in America.
This novel first appeared as the winner of the 2018 Exeter Novel Prize but it has obviously undergone some alteration since.
It's a slow burner. Beautifully written, it begins and continues for some time as more of a portrait of a small Scottish island, drawn with exquisite detail that will make this a novel to return to if ever I want some inspiration on descriptions that work but are new and fresh. "Darkness clotting" is a favourite.
The ghostly element is gently introduced and for the majority of the book is described but not necessarily felt, but the mystery of what on earth is going on and where is this going will keep you reading, if the beautiful prose isn't enough to lap up. The denouement is unexpected until just before it happens, and it is surprising if not entirely shocking - a tale as old as time of jealousy and anger, and ghosts. For, as always in these stories, everything is not always what it seems.
The tension one would expect in a ghost story is lacking, in my opinion, because the prose is so dreamy, but it is a satisfying read and I'm not surprised its, presumably, less polished first draft won an award.
Reviewed for Discovering Diamonds