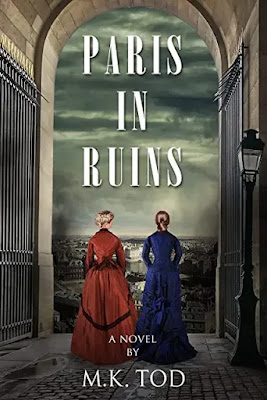 "A few weeks after the abdication of Napoleon III, the Prussian army lays siege to Paris. Camille Noisette, the daughter of a wealthy family, volunteers to nurse wounded soldiers and agrees to spy on a group of radicals plotting to overthrow the French government. Her future sister-in-law, Mariele de Crécy, is appalled by the gaps between rich and poor. She volunteers to look after destitute children whose families can barely afford to eat.
Somehow, Camille and Mariele must find the courage and strength to endure months of devastating siege, bloody civil war, and great personal risk. Through it all, an unexpected friendship grows between the two women, as they face the destruction of Paris and discover that in war women have as much to fight for as men.
War has a way of teaching lessons—if only Camille and Mariele can survive long enough to learn them.!
This gripping story focuses on the two young women Camille and Mariele but both come from large families and their mothers, fathers and brothers are all also caught up in the fighting in various ways and the fate of all hangs precariously in the balance.

Camille is quite headstrong, with a tendency to ignore convention, take risks, not toe the line. Mariele is less so, at first in awe of, and perhaps a little envious of Camille. But neither is stereo-typically 'feisty' and both are hugely aware of their place in society, and their duty, despite railing against it at times. Camille lives life to the full in part because of the death of her sister, Juliette. It is as if she is living life for the both of them, and this drive, born of such a loss, felt very credible. She knows, even before the siege begins, that life is fragile and can be snuffed out in a moment. This knowledge informs her actions.

The horrors of war, the effects of the violence not only on the soldiers but on the civilians, are graphically and unsparingly described. The author has an economy of words which gives us the bare detail, and somehow makes it more visual. However for me the main interest lies in the development of the young women and their burgeoning awareness not only of what war can do to people's lives, but of their own place in the world. Did it take war to make them realise that marriage and children are sometimes not enough, or was it the age in which they were living? There is a stark contrast between their privileged existence and the plight of the poor of Paris. The women who live in the poorer quarters agitate for change and a powerful message comes through that women from all corners of society want, nay demand, more rights.

Woven into this driving narrative are the individual stories, the breaching of the divide between rich and poor, and the brave people who put their lives and careers on hold in order to help the war effort. One such example is the actress Sarah Bernhardt who here is shown turning her theatre into a hospital. In such times, social niceties have to be ignored, to the acceptance of some and to the horror of others: there are situations where young ladies cannot be chaperoned, for example; these moments, and the day that Mariele brings two poor children back to her family's grand house, demonstrate that this was an age where the older generation in particular were at first scandalised and then had to grow to accept the changes all around them, changes that would endure beyond the war.

This period of French history is not one with which I was familiar, and the author has a knack of providing just enough information about the military campaign without slowing down the narrative. There is no awkward exposition, and no 'info dumping'. The characters who provide the news do so in a believable and logical way; they would indeed have been the ones to receive the intelligence. Other characters talk about what they've read in the newspapers, in a very conversational style.

The only thing I would have liked to have seen explained is how Andre, a young man of Camille's acquaintance, initially came to be doing his dangerous work, more of which I won't say, for fear of spoilers.

The pacing of the book is fast; rarely a page goes by without the plot moving forward, and this completely chimes with the subject matter. These were eventful, frightening times and this is expertly conveyed. A great read which I heartily recommend.
Reviewed for Discovering Diamonds