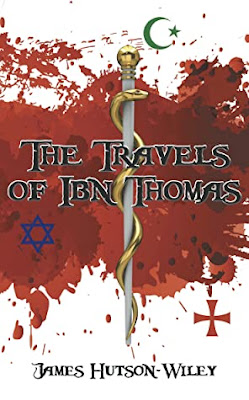 Fictional Drama
twelfth century
Egypt / England / Europe
The world at the beginning of the twelfth century was a complicated place—especially for someone with a Christian father and a Muslim mother who has been raised as a Muslim in Egypt until one day he is sent off at the age of seven to be raised by Christian monks. Why this brutal uprooting? Well, little Thomas’ father has disappeared, and according to his instructions, his only son is to be sent back to England.
Baptised on his way to England, our young protagonist is now firmly Christian—or so everyone around him assumes—and after some initial years of schooling in England he is sent off to Salerno to become a highly educated physician. The Church (or rather some of the shadier organisations within the Church) expresses a keen interest in young Thomas—especially once he has completed his education at a school where Christian, Muslim and Jewish texts are used to impart as much medical knowledge as possible.
Through the machinations of the Church, Thomas ends up in Sicily, charged with a mission to spy for the Holy Church and do whatever else may be required to safeguard the faith. When Thomas discovers this safeguarding includes such distasteful tasks as poisoning the young Ruggerio of Sicily, he refuses. He also refuses to spy, which is why he is suddenly obliged to flee for his life when the vindictive Church lashes out. Over the coming years, Thomas will suffer pirate attacks, travel across the Mediterranean, befriend a hashashin, be sent off on a secret mission to Damascus and, finally, make it to Jerusalem where he is determined to find out what happened to his father.
Thomas is something of a chameleon. As comfortable with Christian rites as with Muslim teachings, he fits in as he must to stay alive. At times, this causes him anguish and a lack of identity. It also makes him tolerant—and confused. To Thomas, there is no major difference between the faiths of the various People of the Book, but in the times he lives, divisive lines are drawn between the various faiths and anyone attempting to straddle the divides is, per definition, a potential apostate.
Thomas Ibn Tomas is a resourceful if credibly naïve young man when he sets out to somehow navigate his way through what, at times, is a much too exciting life. Life, however, has its own way of imparting lessons, and by the time The Travels of Ibn Thomas comes to a close, our protagonist has lost his innocence and instead gained a modicum of two of wisdom. Not, all in all, a bad trade.
It is evident Mr Hutson-Wiley has enjoyed submerging himself in the complexities of the time, be they the divisions within the Holy Church or the enmity between the Sunni and Shia Muslims. There is a lot of detail in this book: about the texts Thomas studies, about the spices he uses, about how to make soap, about the trade in sugar and various methods of worship. At times, all this detail has the pace dragging. At others, a couple of sentences indicate we have now leapt several months forward. It is a tad distracting, this uneven flow of time.
The narrative itself is well-written with excellent descriptive passages. At times, it reads very much like a memoir, which creates a distance between the reader and the described events so it might not suit those who like fast paced adventure. For readers fascinated by the evident religious friction in the time of the first crusades however, The Travels of Ibn Thomas is an elucidating read.
Reviewed for Discovering Diamonds