A Discovering Diamonds review of A Healing Touch by Liz Arnold 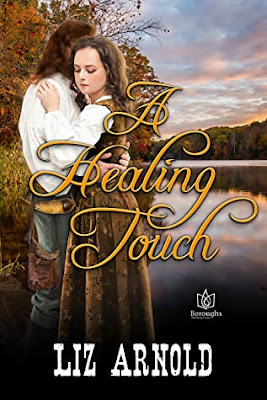 Romance
18th century
USA
A Healing Touch by Liz Arnold is set in 1796 and centers around a young woman, Molly Hillard's journey from Baltimore to Ohio after completion of medical training. She has undergone her training as an apprentice to Dr. Andrew West who develops a romantic interest in her. Molly does not reciprocate his feelings and insists on traveling, despite the dangers, that a single white woman could encounter. During the journey, she falls in love with Romney, a white man who was raised by the Delaware tribe and is often treated as a "half-breed" among white people. She is captured by another tribe despite Romney's efforts to escort her safely home. How they deal with the challenges en route, the conflict between the White people and the Natives, the prevalent illness at that time i.e smallpox, and how Molly's skills as a healer influenced her capture and release are detailed in the novel.
What was well done: The descriptions of life in the US at that time, the plants used for healing, how people lived and traveled are well researched and described.
There were a few inconsistencies: In the beginning Romney is shown to have a problem with English words because he was raised by Native Americans. After a few chapters, this disability disappears. He rescues his sister from her captors very easily at night in chapter 5 without any resistance, although in the previous pages, dogs were mentioned. The reader is left wondering why the dogs did not bark - were his sister's captors away with the dogs etc? Another inconsistency with respect to his sister was that she was captured by a man ten years ago from the Delaware tribe. When Romney, after rescuing her, is heading down the Ohio River, the Shawnee tribe appears and claims that they had taken his sister 10  years ago and now want her as the wife of one of the Native Americans. One wonders why the Shawnee tribe didn't care about retaking the girl in the ten years that she was with another tribal man.
Molly is portrayed as a strong woman, no stranger to men, being a medical person. She falls in love with Romney the minute she sees him, with the attraction being physical and the reader is left to wonder why a strong woman, determined to travel to her family at the beginning of the novel, changes her plan and decides to accompany a stranger on his mission to find his sister on the day after she met him for the first time. The same goes for the physical encounter they later share. I found it hard to believe that single women were unchaperoned in the late 1700s.There were also some characters and over-detailed descriptions that could have been cut to maintain the pace, especially in the middle where the narrative lost moment a little.
Having said all that, this was a typical, straightforward romance (girl meets boy, falls in love etc.,) with 'author's licence' where historical fact is concerned, but fans of light romance will enjoy this story for what it is - entertaining romance.
Reviewed for Discovering Diamonds