A Discovering Diamonds review of Playing With Fire by Jayne Davis 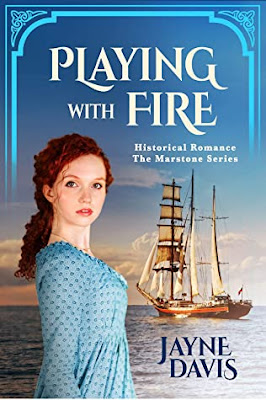 Amazon UK
Amazon US
Amazon CA
Amazon AU
Goodreads
The Marston Series #3
Fictional Saga /Romance
eighteenth century
France
"France 1793. Phoebe’s future holds little more than the prospect of a tedious season of balls and routs, forever in the shadow of her glamorous cousin and under the critical eye of her shrewish aunt. She yearns for a useful life, and a love match like her parents’, if such a thing could ever be possible for an unwanted, poor relation. But first she has to endure the hazards of a return home through revolutionary France—a nation suddenly at war with the English. Her aunt’s imperious insensitivity soon arouses a suspicion that quickly develops into mortal danger. Can a stranger encountered on the road prove to be their unlikely salvation?
Alex uses many names, and is used to working alone. A small act of kindness leads him to assist Phoebe’s party, even though it might come at the expense of his own, vital mission in France. Ignoring his own peril, he is willing to risk all in the hope of getting them safely back to England. Unexpectedly, as he and Phoebe face many dangers together, he finds his affections growing towards the resourceful and quick-witted red-head, despite their hopeless social differences. Alex dismisses the possibility of a match between them, not realizing that she feels the same way about him. Before they can admit to their affection for each other, they must face the many difficulties that lie ahead."
Well, I do enjoy a good eighteenth-century romance, and this one was no exception. Our young couple are a likeable pair in what I found to be an enthralling story. Phoebe and Alex were delightful characters, and I even enjoyed (although I'm not sure that 'enjoyed' is the right word!) the unkind aunt because the author portrayed her very well as an unlikeable person! Don't we all love a villain occasionally!
I also enjoyed meeting up with characters from Ms Davis's other books in this series (Will Marstone, for instance), although perhaps the author could have reminded us with a little more backstory about who they were and what significance they held - it has been quite a while since I read Sauce For The Gander, for instance, so it took me a while to remember the details.
It is a big book at 500 or so pages, so not a one-off cosy afternoon's reading in front of the fire, (ha ha despite it's title!) and there were a couple of passages that flagged a little, but even so this was a most enjoyable adventure. An adult read, for there are references to violence, including sexual violence, but there is nothing explicit.
If you like your romance reading to be full of adventure, with quick-witted heroines and rather nice heroes, with an added touch of well-researched historical background, this one is for you - it is a stand-alone, no need to have read the other two in the series, although I would recommend that you do.
Reviewed for Discovering Diamonds