A Discovering Diamonds review of The Noose's Shadow by Graham Brack 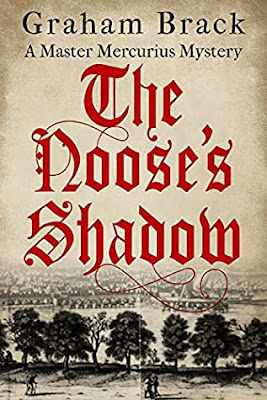 Murder Mystery
17th century
Netherlands
"1680, Leiden, The Netherlands. After a successful trip to England to secure the Princess Mary’s hand in marriage to William of Orange, Master Mercurius is back at the University of Leiden. And once more, he finds himself embroiled in a local mystery. A farmer named Wolf was stabbed to death outside his home, and his neighbour Jaco has been arrested for the murder. But Jaco’s wife Sara is convinced her husband is innocent, and Mercurius believes her. As Mercurius gathers the facts, it soon becomes clear that Wolf was a deeply unpopular man. But is that enough of a motive for murder? With the shadow of the noose looming over Jaco, Mercurius is running out of time to catch the killer and stop an innocent man from hanging in his stead. The Noose’s Shadow is the fourth historical murder investigation in the Master Mercurius Mystery series: atmospheric crime thrillers set in seventeenth-century Europe."
This was my first foray into Graham Brack's Master Mercurius murder mystery series. There was much I enjoyed, a little I didn't.
This is not a fast-paced action thriller - I hope it isn't a spoiler but 'whodunit' was obvious from the start, although our sleuth took several chapters and quite a few days to reach the same conclusion. However, the enjoyment was in finding out how our theological university lecturer reached his eventual conclusion.
I like Mercurius, he is an amiable, amusing somewhat naïve fellow who has his own outlook on seventeenth-century life, and is a closet Catholic priest in a non-Catholic university. I like him because of his naïvety, his lack of arrogance and his preference for thinking things through in the local pub rather than the quiet of the church. I didn't like him so much, oddly, for almost the same reasons - I felt these points were a little over-egged by the third part of the book: enough already of the mayor trying to marry him off to his daughter but our hero not realising the fact, and a few other repetitive scenes. I also rather skipped Mercurius's various thoughts on religious matters and quotes, which were quite acceptable given that our man is of a profound religious faith, but as a non-believer I found them a little tedious, a little too lecturing by the back door maybe?
All of which makes it sound like I didn't enjoy The Noose's Shadow which is completely incorrect! I did enjoy it! The book is very well written, the research is immaculate, the characters realistic, the narrative flowed and I found it very refreshing to read about a country (the Netherlands) which is rarely written about (outside of Tulips...!) This is a light, easy and entertaining read.
Will I read more about Master Mercurius? Certainly, I've already downloaded the first book Death In Delft.