A Discovering Diamonds review of Children's Fate by Carolyn Hughes 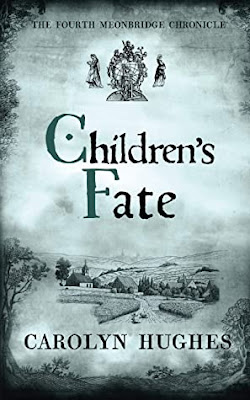 Amazon UK
Amazon US
Amazon CA
Amazon AU
Goodreads
Fictional Saga
14th Century
England
"It’s 1360, eleven years since the Black Death devastated all of England, and six years since Emma Ward fled Meonbridge with her children, to find a more prosperous life in Winchester. Long satisfied that she’d made the right decision, Emma is now terrified that she was wrong. For she’s convinced her daughter Bea is in grave danger, being exploited by her scheming and immoral mistress. Bea herself is confused: fearful and ashamed of her sudden descent into sin, but also thrilled by her wealthy and attentive client. When Emma resolves to rescue Bea from ruin and tricks her into returning to Meonbridge, Bea doesn’t at first suspect her mother’s motives. She is happy to renew her former friendships but, yearning for her rich lover, Bea soon absconds back to the city. Yet, only months later, plague is stalking Winchester again and, in terror, Bea flees once more to Meonbridge. But, this time, she finds herself unwelcome, and fear, hostility and hatred threaten… Terror, betrayal and deceit, but also love and courage, in a time of continuing change and challenge – Children’s Fate, the fourth Meonbridge chronicle."
Followers of this series will enjoy this next episode, equally newcomers, but I do suggest starting at the beginning to fully get to know the village of Meonbridge and its engaging inhabitants.
What I enjoyed about this novel, (as with the previous books) is the excellent character development and the attention to detail - I must admit, with some poignancy because of the present pandemic that is affecting the world. Choices about what is best for our children are always difficult, and I found myself, while reading, thinking in these circumstances, what would I have done?
The exploitation of women, young girls in particular, is also well written - times were tough, which again mean tough choices. And then, those choices once made have to be lived with, for better or worse.
The author also brings across the difference, in these Medieval times, between life in a town or a village, between those who have and those who have not, while creating that underlying realisation that Plague has no distinction between the sexes, ages, or wealth and poverty - again another reminder that our present-day situation is not much different. (Except, of course, we now have medicines, better health care - and a vaccine!)
Very enjoyable.
Reviewed for Discovering Diamonds
© Ellen Hill
e-version reviewed