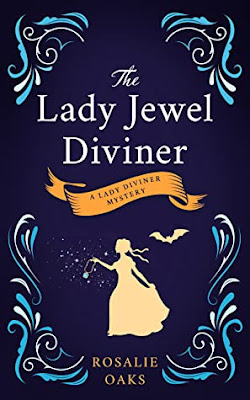 Amazon UKAmazon USAmazon CAAmazon AUGoodreads
fantasy/ cosy mystery
Regency
England/ Devon coast
Miss Elinor Avely finds herself exiled on the Devon coast with her mother and brother after her reputation was ruined in London in a most public fashion. Accused of stealing a jeweled necklace, she self-destructs further when she shuns Lord Beresford, who tried to save her by declaring before one and all that she was his fiancee. Exiled from society, Elinor is determined to keep her head down and be a dutiful daughter. Until, that is, her evening is interrupted by a bat flying into her room, turning into a tiny, naked woman, and demanding to be fed a sheep. The two form an unlikely alliance when a local man turns up dead, piles of jewels and gold are missing and presumed to be smuggled to France to pay Napoleon, and an identity of an English spy may hit too close for comfort.
This was an entirely agreeable cosy mystery. Or cosy fantasy. Either one would be accurate. Honestly, though. Who wouldn't adore a Regency cosy mystery fantasy romance? Elinor is a typical figure in many Regency romances and mysteries. She is curious, intelligent, and not at all afraid to speak her mind. If only Lord Beresford could appreciate that about her! Or does he?
Aldreda Zooth, the tiny bat-woman, is a vampiri from France. She is in England to search for a necklace that belonged to her lost beloved and she convinces Elinor to help. Elinor is what Eldreda calls a Diviner, one who can find hidden objects by a sixth sense. This is, of course, what led to Elinor’s disgrace in London - she found a necklace but was accused of stealing it. Elinor agrees to help Eldreda but they are soon both drawn into an intrigue. Elinor gets to display her bravery and intelligence in several instances, but is still able to be a damsel in distress. Eldreda is an ideal chaperone, even though she is fairy-sized, and is a plucky and fun character.
Elinor’s brother, Perry, is a bit flat in terms of character development, but I really don’t think it matters a whole lot since he is not the main attraction of the novel. He is in it enough, though, that a little more depth for him would be appreciated. Perhaps this will come in future books, as the second in the series is set to be released on 1 March 2021.
I will definitely be on the lookout for that book as well as others by this author. A light, somewhat silly (in the 'fun' sense), cosy mystery is exactly what I needed to read as pure escapism. Enthusiastically recommended.
Reviewed for Discovering Diamonds
© Kristen McQuinn e-version reviewed