A Discovering Diamonds review of Gathering Storm by Maggie Craig 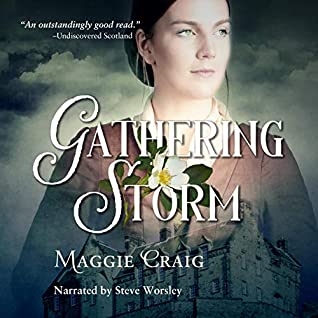 "Jacobite intrigue and romance in 18th century Edinburgh: history, mystery and love across the political divide. Edinburgh, Yuletide 1743, and Redcoat Captain Robert Catto would rather be anywhere else on earth than Scotland. Seconded back from the wars in Europe to command the city's Town Guard, he fears his covert mission to assess the strength of the Jacobite threat will force him to confront the past he tries so hard to forget.
Christian Rankeillor, her surgeon-apothecary father and his apprentice Jamie Buchan of Balnamoon are committed supporters of the Stuart Cause. They're hiding a Jacobite agent with a price on his head in Edinburgh Royal Infirmary: a hanging offence.
Meeting as enemies, Robert and Kirsty are thrown together as allies by their desire to help Geordie and Alice Smart, young runaways from Cosmo Liddell, bored and brutal aristocrat and coal owner."
Reviewing this book has proved somewhat of a challenge for me. Had I not been reading it for the purposes of review, I might well not have finished it. Equally, having read to the end, I find I'm still spending moments of my day with the characters, which is a sign of having read a good book. So why the conflicting views?
Let me start by saying there is no doubt that Ms Craig knows her subject inside out. Her research, and her ability to drop the reader firmly into the setting are of the highest standard. I found myself querying the use of the 'f' word, but then decided that the author, who is somewhat of an expert on the period, must be confident that it was used by such characters as Robert Catto. (And now might be a good time to add a general warning: there is worse language than this used in the book, as well as scenes of detailed sexual activity and violence.)*
So, why did I think I might not finish the book? It has to do with that research, which at times I felt slowed the pace of the narrative. Every item is described in detail, as is every action. In this book, people don't just pour the drinks, they stir, they put the vessel back down on the table, and we are even told the position of that table in the room. Along with this, there are very lengthy conversations - one conversation between Catto and his employer lasts for two chapters - and a great deal of the early part of the book is taken up with the characters discussing in detail what is about to happen, or cogitating on what has been said about what is to happen, or dreaming about the character with whom they'd had the conversation about what is going to happen...
Much, if not all, depends on the upcoming 'Daft Friday' ball, when the escape is planned and loyalties will be proven or disproven, and I began to wonder, given how intricately everything is described, there would be time to fit in all the details of the ball: those attending, what they were wearing, how they danced, etc. I also began to grow impatient with Robert Catto's numerous inner monologues about his family secrets.
And then... The day of the ball arrives, the pace quickens and everything falls into place. Throughout the book the main thread has been the Jacobite messenger and the attempts by various characters to get him out of the city, or apprehend him, depending on which side they're on. There's also been a murder, and more than one assault, and the question of whether these are connected and, indeed, whether they have anything to do with the main story...
Having assumed that I was about to be short-changed, having got to nearly the end of the book and knowing that this was the first in a series, I had resigned myself to being left with an annoying cliff-hanger. Not a bit of it. Ms Craig skilfully revealed the heart of all the various mysteries and plot-threads in a way which (no spoilers) took me completely by surprise! She tied up the narrative in a most satisfying way, whilst still allowing for the story to continue in the next volume. I went from thinking I didn't want to continue reading this book to being sad to close it at the end!
The back cover /Amazon blurb, (above) could, I feel, be better written. Two names mentioned are the same person, it gives a massive spoiler away, but then fails to mention something which is pivotal to the story.
Overall, this is an accomplished novel, which shows both sides of 18th-century Edinburgh: high society, and the city's underbelly. The way these two collide, and the merging of the murder mystery with the politics of the day, is interesting and was cleverly done. And afterwards it occurred to me that what seemed like slow scenes of long conversations is no doubt exactly how these characters would have conducted their business. I was, perhaps, impatient and I am extremely glad to have finished the book and witnessed the denouement. So a worthwhile read indeed!
Reviewed for Discovering Diamonds
© Lucy Townshend.
e-version reviewed
* the 'f' word is believed to have come from the Dutch language circa mid-1600s, and became widely used throughout Britain after the return of Charles II and his supporters from their exile to Holland, and spread through soldiers fighting in various conflicts between Britain and the Netherlands. It's use would also have spread via trade, so is acceptable for use in the 1700s.

Richard was a stalwart supporter of indie authors and regularly reviewed books here for Discovering Diamonds, and previously for the Historical Novel Society. Our condolences to his family and friends.

Richard is currently ill in hospital Say thank you to a stalwart supporter of indie fiction by buying his book.