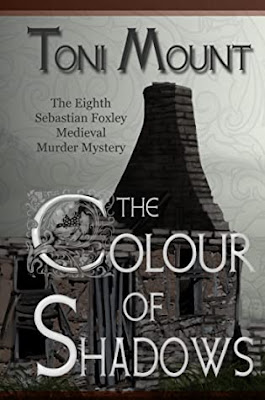 Amazon UK
Amazon US
Amazon CA
Amazon AU
Goodreads
Murder Mystery
1400s
London
The Colour of Shadows is the eighth book in Toni Mount’s popular Sebastian Foxley Medieval Mystery series. In this story, Seb Foxley, a city of London artist and manuscript illustrator, discovers a boy’s body in his workshop and is drawn into the hunt for the missing son of an acquaintance.
Using a sketch of the boy, Seb crosses London Bridge and walks down to Southwark, where he finds himself mixed up in the shadowy world of prostitution and murkier, more sinister crimes.
Despite being a respected local sleuth, Seb is somewhat retiring and naïve, and wanders into The Mermaid tavern having been told it was a place of ‘entertainment’ – he is expecting jugglers. The missing boy has been there, but Seb, and his faithful hound Gawain, barely escape with their lives.
This being my first Sebastian Foxley mystery, I found some of the characters rather flat because their personalities and backstories have been developed in previous novels. That being said, the author weaves in past events and key interpersonal details through dialogue. Seb’s wife is heavily pregnant in this story, and shrewish in the extreme but, we are told, she’s always been a ‘moody mare’ anyway. I would have liked to know more about why Seb is being pursued by an evil-minded nobleman, and what really leads to his arrest while his wife is in labour, but that did not spoil my overall enjoyment of the story, which can be read perfectly well as a stand-alone mystery.
What makes this novel stand out from many other historical mysteries is Mount’s knowledge of the epoch. Instead of focusing on the better-known players of the time, such as the future Richard III, who makes a very brief appearance, her novel is set at the hearthside of a modest family and in the workshop of a skilled artisan. The storyline involves servants, apprentices and journeymen, each of whom is more than a mere supporting character. As one reads about how a manuscript is being illustrated or how a toddler is being distracted by a rag ball, how the pottage is ladled out at mealtimes, one becomes totally immersed in both setting and period.
Well recommended for readers who enjoy a good whodunnit, and/or want to know more about fifteenth-century London. I shall go back now and start on Book 1.
Reviewed for Discovering Diamonds