A Discovering Diamonds review of Begotten by Katherine Pym 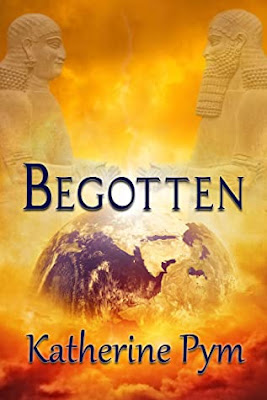 Fantasy / Romance
4500 BCE
Ancient Sumer
"Their world on the verge of destruction, Kessav is shocked when his wife refuses to accompany him to a new land. As the ground splinters under her feet, Luna, a kitchen slave, is terrified. She finds Kessav in the market, fires exploding all around them. He takes her with him where they leap into an energy field to land in ancient Sumer, 4500 BCE. Their new world is clean with no fire belching from rents in the earth, but Elam, Kessav’s old friend, is furious over the wife's desertion and shows bitterness and hatred. Kessav builds a new life but holds secrets from Luna, and Luna fears telling her secrets would destroy Kessav. After the loss of their firstborn to the great goddess, will their love bind them together? Will Elam exact a cruel revenge?"
'Til death us do part' takes on a whole new meaning in Katherine Pym’s story Begotten. The novel opens onto a scene of death and destruction from an unknown natural disaster. Kessav, a wealthy man from the house of Tiamet, travels through a mysterious circle of energy to escape into a new world. His wife, Persponie, refuses to go with him, and so Kessav makes the decision to leave her behind. As he heads toward the place where he will jump into the circle of energy, he wonders if his suspicions of her unfaithfulness could be true.
When Kessav nears the portal that will take him to the savannah he chose as his new home, Luna, a young slave girl from the house of Urik, trips and falls in front of him. Kessav reaches for her hand and pulls her from the frightened and panicking mob. Without thought, Kessav offers to take this young girl with him. Although hesitant, Luna makes the jump to the new world where she will share her life with Kessav.
Although the two strangers have escaped the destruction of the old world they left behind, it is not long before they begin to realize that this new world will not be devoid of danger, mostly due to the devious undertakings of Elam, a man whom Kessav thought was his heart-brother.
Pym does an excellent job using a blend of history and fantasy to capture the interest of her readers in a tale that takes place in Sumer, the cradle of civilization. Begotten weaves together pieces of the past into the characters’ present-day lives, thus shaping Kessav’s and Luna’s story into a page-turning adventure. The historical accuracy about Sumer and the Mesopotamian culture inspires readers to explore the events that shaped this region of the world.
The fantasy Pym weaves into the history gives readers a sense of magical realism that could have very well been a part of the people’s lives during this time. Pym’s balance between fact and fantasy works well because she incorporates superstition and mysticism into the novel, subtly foreshadowing many of the events that bring sorrow and joy into the lives of two characters readers come to love and admire.
When Pym first introduced her readers to the circle of energy, I visualized the use of energy portals and doorways used throughout literary history as symbolisms of transitions people make from one world or life to another. In Begotten, the description of the circle of energy is vague, and I wonder if this was purposeful to allow readers the imaginary freedom to think about transitions, whether literal or figurative. Once Kessav and Luna transition from one world to another, Pym then moves the story forward by skillfully blending history and legend into the tale she tells.
Begotten is about the transitions and changes, good and bad, that influence the actions of individuals. Pym takes readers back to the Epic of Gilgamesh and to the history of Mesopotamia. Born from destruction and tragedy, Begotten is a love story that reveals that, although death is symbolic of endings, it is also a portal to new beginnings.
Reviewed for Discovering Diamonds