A Discovering Diamonds review of The Falcon Queen by Johanna Wittenberg 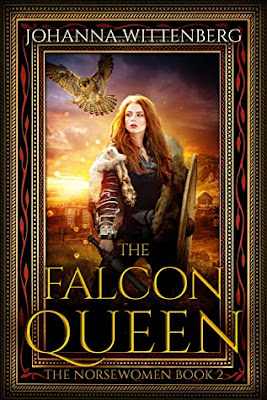 Amazon UKAmazon USAmazon CAAmazon AUGoodreads
Fictional saga / fantasy
9th century
Norway
"Ninth-century Norway, the island of Tromøy.
Åsa has won back her father’s kingdom, but can she hold it?
The evil shapeshifter Hrolf lurks in the hinterlands, plotting revenge. The powerful Danes threaten from across the Skagerrak Sea, demanding marriage in exchange for peace, while her only ally, Olaf, presses his own suit. Though she loves Olaf, Åsa refuses to sacrifice her position and her people’s welfare to become any man’s property.
Then, across the snow-clad mountains comes Ragnhild, a runaway shield-maiden, seeking glory and gold. She seems to be the answer to Åsa’s prayers, but Ragnhild’s past catches up with her, bringing treachery and war."
Äsa Haraldsdotter has achieved her goals: she has avenged her father and brother (by murdering her husband who, in his turn, murdered her father and brother) and claimed the throne of Tromöy (Agder), the hereditary kingdom of her family. It is not a big kingdom. In fact, it is very small, and Åsa lacks both men and weapons to properly defend her kingdom against the advances of the Danes. Except that she has two secret weapons: the young shieldmaidens who join her cause and the support of Olav, her former step-son and lover.
Ms Wittenberg sweeps us back to 9th-century Norway, to a time of legend and magic. This is a time of shapeshifters and heroic deeds, a time where the strongest rules. While Åsa may not always be physically the strongest, she is a force to be reckoned with—especially when she has her back to the wall and must fight to defend those she holds dear.
While I have no problem believing in the occasional shield maiden – women throughout the ages have often taken up arms in dire times—I find it somewhat improbable that a company of women fighters would have been capable of holding their own in a full-on battle against men. Longer reach, superior strength and much more battle experience would have worked in the male warriors’ favour, no matter the determination and passion of their female opponents.
But Åsa Haraldsdotter is a legend and it is as a legend, a woman bridging the gap between myth and reality, that we must see her—and her companions. Ms Wittenberg has taken the ancient stories and twisted them into a vivid description of the challenges facing a young woman who refuses to conform, making her own way in a world where women were usually restricted to the role of wife, mother—and, in some cases, victim. Åsa is no victim. She rules her own little kingdom, oversees everything from the brewing of ale to the preparation of flax. She fights, she raids, she trades, she worries about her little son.
In summary, Åsa comes alive.
Ms Wittenberg has obviously done her research. It shines through in her description of clothes and interiors but at times the very detailed depictions of everything from harvests to ale-making come at the expense of pace. The Falcon Queen is the second in a series, and at times I felt as if I was missing relevant parts of the back story. I suspect this is one of those books that do better when read as part of the series than as a stand-alone. So start with the first book.
All in all, though, The Falcon Queen gives an interesting insight into life in Scandinavia in the years before there even was a united Norway.
Reviewed for Discovering Diamonds
© Anna Belfrage e-version reviewed