A Discovering Diamonds review of The Death Game by Chris Longmuir 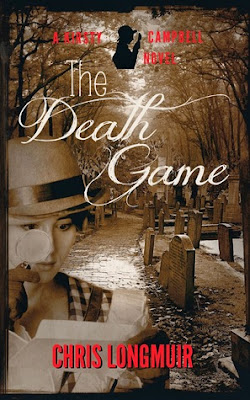 Amazon UK
Amazon US
Amazon CAAmazon AUGoodreads
Mystery/Thriller
WWI
England /Dundee
We take equality for granted in 2021, but in the post-First World War period, it was anything but for women wishing to pursue a paid and purposeful career. Imagine the resistance if you had wanted to enter the very male environment of the police force. Kirsty Campbell has to face this in spades as she becomes the first policewoman in her home town of Dundee.
At the end of the war a new women’s police force was set up called the Women’s Police Patrols which drew its recruits from the Women’s Police Volunteers and the Voluntary Women Patrols. Many of these women had been suffragettes and suffragists so on the ‘consumer end’ of police action. But the First World War had changed that as the women campaigners had called a ‘truce’ and volunteered in support of the nation’s needs in war.
The post-war Women’s Police Patrols were more formal, particularly in London and its trained and uniformed members were deployed in escorting lost children and dogs, controlling prostitutes and taking statements from women. Kirsty and her colleagues took pride in their professionalism and smart appearance always sensitive to not being taken seriously and to the unwritten need to perform better than their male colleagues expected.
When Kirsty is asked to become the sole pioneer back in her home town of Dundee, she has misgivings, but for somebody of her strong character and dedication, she soon agrees.
But it’s a nightmare. Her male ‘colleagues’ ignore or sideline her, her old family disputes come back in full bite mode and then there’s a particularly savage murderer on the loose.
Chris Longmuir gives us a very strong sense of place of Dundee in the post First World War period, a Dundee typical of a world irrevocably changed by that war. She doesn’t flinch from describing the seamier side of life, the varied personalities, the kind hearts and the cold minds. Her heroine, Kirsty, is prickly, but tenacious in her duty and determination. But she has a soft heart and a sensitive nature which sometimes lead her to be impulsive with not such good outcomes. Kirsty is an attractive character because of this very complexity.
A historical mystery with edge and a protagonist I want to read more about.
Reviewed for Discovering Diamonds
© Alison Morton e-version reviewed