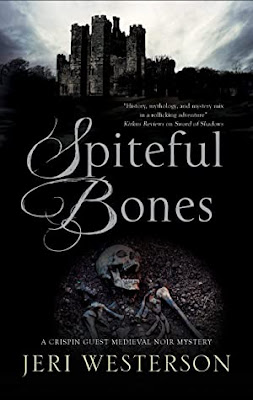 Amazon UKAmazon USAmazon CAAmazon AUGoodreads
Mystery / medieval noir / Fictional saga
14th century
London
Some fun characters from the past feature in this story, the 14th instalment of Westerson’s Crispin Guest medieval noir series. Nigellus Cobmartin has inherited his father’s house upon the death of his older brother. He and his lover, the delightful John Rykener (under the guise of Eleanor) are in the process of restoring it, the house having fallen into disrepair. The workers discover a gruesome scene - a skeletonized body tied up within the walls of the manor house. It is determined that the body belonged to a former servant who the Cobmartin household thought stole a relic and then took off with the wife of another servant. At the same time, Nigellus and John are victims of extortion, under threat of their lifestyle being exposed if they fail to pay the unknown villain. But nothing is as it appears at first glance, and so Crispin and his apprentice, Jack Tucker, find themselves on the hunt for an extortionist who may also be a murderer.
The character development over the course of this series has been excellent. Crispin is now in his forties and is beginning to feel the effects of a hard and active life, though he rails against it. Jack is taking on more of the lead role in the sleuthing duo and is the image of a young and vital man. There were a few times that he saved Crispin’s neck, literally and figuratively, and while it was lovely to see, I also miss little boy Jack even as I revel in the upstanding man he has become.
Crispin himself has long since accepted that he is no longer nobility and has made a family for himself with Jack, Jack’s wife Isabel, and their growing brood of children. He seems content enough with his lot and takes pleasure in the simple joys in life in ways he was unable to do before. One of his greatest joys is in his son, Christopher, who he is unable to acknowledge. His friends, too, are his joy, and he throws himself into investigating who would murder a friend’s servant, driven to protect those he loves.
As always, Westerson creates vivid scenery in her settings. It is easy to picture the sights (and, unfortunately, the smells!) of the Shambles and other places in medieval London. The strength of her descriptive writing is exceptional and that, along with complex character development, have made Westerson one of my favorite authors. She creates characters readers genuinely care about and then develops them into rich and multidimensional people, even secondary characters.
Take, for example, Nigellus Cobmartin and John Rykener. Nigellus is a fictional character, but Rykener was a real man who dressed as a woman and was a whore and a skilled embroideress. Their relationship, while it may seem implausible to us given the time period they were from, could well have happened. Rykener was listed as having a husband in one of the documents Westerson referenced, though the man was not named. Why not let the husband be Nigellus? There have always been LGBT people, even if they had been vilified, shunned, or even killed at various points in history. A lack of understanding does not mean they didn’t exist, and there is plenty of documentation to prove it. I think it is really important to discuss social issues in all their many elements, but literature is an ideal medium in which to do so.
Readers get to know both Rykener and Nigellus over the course of a few books, and can see them as people rather than ideas, mere figures on a page, or solely by their sexual identity. Having other characters like Crispin sometimes struggle with how they see Rykener helps create depth but also gives a nuanced examination of our own society. A long-winded way to say that I love their relationship, the characters themselves, and how Westerson approached it.
I was sad while I was reading this story because I thought it was the final entry in the Crispin Guest series. But I was wrong! There is one final adventure to share with Crispin, Jack, and friends, The Deadliest Sin, which Westerson’s website says will be released in 2022.
In the meantime, I highly recommend this book, as well as the rest of the series, to anyone who loves a good, complex, brooding protagonist and a delightful cast of secondary characters.
Reviewed for Discovering Diamonds
© Kristen McQuinn e-version reviewed