A Discovering Diamonds review of Dishonour and Obey by Graham Brack 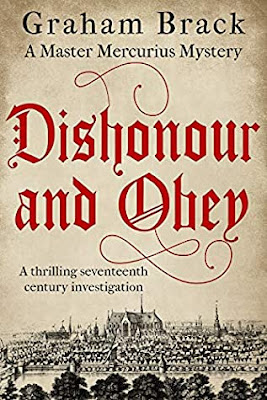 Amazon UK
Amazon US
Amazon CA
Amazon AU
Goodreads
Mystery
1600s
Netherlands / England
After a two-year break, back at the University of Leiden, Master Mercurius is sent on an international diplomacy mission to the court of Charles II in London. His brief is to ensure Princess Mary is a suitable bride for the Dutch Stadhouder, William of Orange, and help along the negotiations for the matrimony.
Dishonour and Obey is the third historical murder investigation in the Master Mercurius Mystery series. Mercurius, a Leiden academic, is relating his memoirs to a scribe. It is a process that includes a certain amount of pondering introspection on matters of religion, ethics and the tensions created by being both an ordained Catholic priest and a Protestant minister, but this aspect of Brack’s novels is often amusing, and by no means pedantic or pointless because it explains much of Mercurius’ personal observations and actions.
In this outing, self-deprecating Mercurius finds himself involved in a murder inquiry at the behest of the merry monarch Charles II. One of the visiting Dutch party is murdered before they have got their land legs, and this threatens to undermine the king’s negotiations with Prince William, if not discredit his royal hospitality. The motives for the crime are a complicated affair and the king’s advisers appear to be hindering the investigation in an attempt to protect the identity of a British spy. Little by little, however, through dogged sleuthing Mercurius whittles down the suspects and motives, and with a master stroke of common sense he unmasks the culprits and their convoluted crime.
Graham Brack once again gives us a gripping story and a chuckle or two, wrapped up in some serious historical detail, which, given the complexity of the European battles for supremacy between France, the Netherlands and England, is achieved with skilful economy. I occasionally had to flip back to check who was who, but I particularly enjoyed the portrayal of Charles II, a larger than life figure in height and appearance with a short attention span but a deceptively cunning mind.
Apart from being a devious whodunnit, this is a novel worth reading for its convincing exposé of Restoration court life and the political intrigue behind royal marriages. The princess, of course, has no say in the matter – that is how it was in those days. History, on the other hand, tells us she prevailed and possibly even enjoyed the last laugh.
Reviewed for Discovering Diamonds