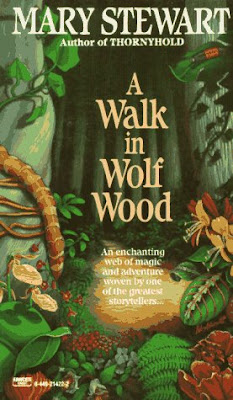 A good read revisited
Amazon UK
Amazon US
Amazon CA
Amazon AU not found
Goodreads
Young Adult / Timeslip
14th Century
Bavaria
John and Margaret are on holiday with their parents on a sleepy, summer afternoon in Bavaria, having a picnic in a wood, when a strange-looking man walks past crying. He's dressed as a re-enactor, or so they think, but the costume is just too good. So, they follow him, and find the gold medallion they had seen him wearing dropped in the grass. They determine that they have to return it and eventually find a small cottage where, having looked through the windows and seen the same clothes piled on a bed, the strange man must live. They are about to leave when they are confronted by a wolf, but, even though John throws the medallion at it to scare it, the children realise it was already turning away. Why is the wolf afraid of them, who is the stranger, and how will they return the medallion to its rightful owner?
I first read this book when I was a young teenager, and it had been a favourite. Returning to it as an adult with a vast amount more knowledge of the historical era it is set in (not giving too much away, this is a time slip novel) which is 1342, I did wonder if it could ever stand up to my childhood memories of it. And, to give the novel and Mary Stewart credit, it did, pretty well.
It is not a complicated story and as children's books have to, the plot and good characters are essential. Being a 1980s novel with a much more old fashioned tone, the children are rather sketchy and simple, but all Ms Stewart's talents go into the character of the stranger, a young lord called Mardian. He is beautifully drawn. The castle setting is vivid and lively, accurate enough for me, and avoids most pitfalls of a historical novel.
It does have scope to be a much longer, more complex story, and it does even satisfy the more recent taste for fantasy, but if you are looking for a good shortish story to introduce the genre to a young person, or an old person, this is an excellent place to start.
Reviewed for Discovering Diamonds