A Discovering Diamonds review of The Diplomat of Florence by Anthony R. Wildman 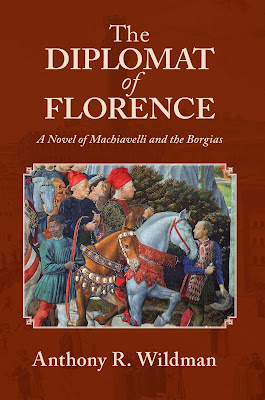 Amazon UK
Amazon US
Amazon CA
Amazon AU
Goodreads
fictional biography
1400/1500 / Italian Renaissance
Italy / Florence
Niccolò Machiavelli is a name best known for the adjective created from it: Machiavellian – deceitful and unscrupulous in the pursuit of power. “Never attempt to win by force what can be won by deception,” he wrote in what is probably his best-known book, The Prince. In The Diplomat of Florence, Anthony Wildman gives us a fictionalized biography of a man working tirelessly in the complex, changing allegiances of Renaissance Italy, not for himself or for one leader, but for the benefit of his city and republic, Florence.
The politics of the Italian Peninsula in the years of Machiavelli’s life are intricate. ‘Italy’ as a country doesn’t exist. The peninsula is divided among 12 powers: kingdoms, duchies, republics and the papal states, and powers from outside the peninsula, notably Spain and France, are influential in supporting (or not) various city-states. In Florence itself, two families – the Medici and the Borgias – vie for power. In this fluid, dangerous political situation, Niccolò Machiavelli, a man born into a minor landed family, rises from a junior clerk to a leading diplomat: one whose ideas and policies shaped Florentine history, but also led to his own exile.
For a good portion of his life in diplomacy, Machiavelli must negotiate with a brilliant but dangerous man: Cesare Borgia, bent, with the support of his father Pope Alexander VI,  on ruling much of the peninsula. Machiavelli admires Borgia’s devious military mind, even when he doesn’t agree with him or his purposes, and Wildman suggests the reluctant and reflective appreciation Niccolò has for Cesare as an impetus for his own development as a master of subtle intrigue.
As war and its enormous cost drain its coffers and occupy the minds of its leaders, Florence emerges as a crucible of art and science and thought, and names we know are intertwined with Machiavelli’s: Leonardo da Vinci, both as artist and military engineer; Michelangelo; even, briefly, Thomas Cromwell. None of this seems forced: Wildman’s recreation of Florentine society rings true, as does the details of the city and its customs. Machiavelli adds to this: over his life, he wrote not only the political and military treatises he is known for, but poetry and drama.
Wildman gives us a sympathetic and nuanced look into the life, personality, and mind of a Renaissance man whose influence extended, and continues to extend, well beyond his time. Placed in the context of the politics of the time, explained clearly but naturally within the narrative, Niccolò Machiavelli emerges as a very human man, working for the greater good of his republic, but also, in his role as observer and influencer, analysing how power can best be used to lead.
This is a well-told fictionalized biography, which maybe could have had a little more 'sparkle' to the narrative, but the history and personality of Machiavelli were written well enough to keep me reading; I learned a lot and would recommend it to anyone interested in an overview of the politics and disputes of Renaissance Italy, especially Machiavelli as both the man and the diplomat.
Reviewed for Discovering Diamonds
© Marian Thorpe
e-version reviewed