The Last Blast of the Trumpet by Marie Macpherson 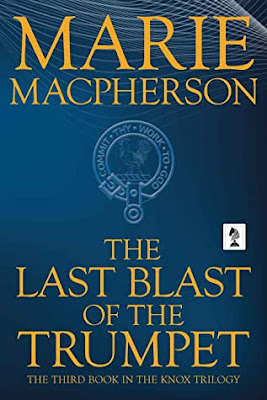 "Scotland 1559: Fiery reformer John Knox returns to a Scotland on the brink of civil war. Victorious, he feels confident of his place leading the reform until the charismatic young widow, Mary Queen of Scots returns to claim her throne. She challenges his position and initiates a ferocious battle of wills as they strive to win the hearts and minds of the Scots. But the treachery and jealousy that surrounds them both as they make critical choices in their public and private lives has dangerous consequence that neither of them can imagine."

I have thoroughly enjoyed the first two books in this series - and was so hoping that the final conclusion would not let the side down. I need not have worried; if anything, Book Three even surpasses the other two.

John Knox is a character you either like or loathe, depending on your view of his determination, passion and conviction. Here is a man of a complex nature, living in a complex period with complex motivations. But then, this entire period of Scottish history was complex - the religious reformation, the political situation - all wrapped up in the diversity of support (or lack of it) for Mary, Queen of Scots.

Ms Macpherson skilfully juggles all these complexities of the political situations with apparent ease. The passionate views and goals of her characters come over as real, flesh-and-blood people, with her writing as passionate as their personal convictions. The author immerses the reader into the upheaval of the period as if we are there, watching on the sidelines as the political and religious battles are set into action by some of the most well known and controversial people who were a part of Scottish history.

A superb ending to an equally as superb trilogy. This is one of those series about history that should be compulsory reading for upper-grade students at school - or anyone interested in Tudor-period history, come to that.

The books are stand alone - but do start at the beginning, it is well worth it!